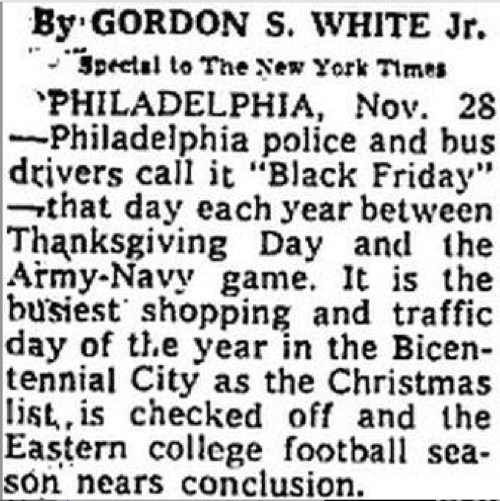 slideshow
Adding the word “black" to a day of the week began in September 1869, after Jay Gould and James Fisk tried to corner the gold market. Prices plunged, wealthy investors lost money and the day became known in the press as Black Friday. After the stock market crashed on October 24, 1929, newspapers referred to the day in its coverage as Black Thursday. Five days later, when the largest single number of shares were traded in stock-market history, newspapers called the frantic and destabilizing event Black Tuesday.

In the early 1960s and again in the '70s, the Philadelphia police, as reported by the press, referred to the nightmarish surge of suburban traffic and sidewalk shoppers on the day after Thanksgiving as Black Friday. Not until 1981 was Black Friday used in a shopping context, much to the chagrin of retailers' associations, who initially found it too grim a term. Retailers eager for the business began marketing the term, since shopping mania their bottom line and profitability, and put their ledgers back in the black.

By the 1990s, Black Friday became a thing—the day when store owners nationwide offered one-day deep discounts on merchandise. Cyber Monday followed in 2005 at the end of the Thanksgiving weekend thanks to the National Retail Federation, which coined the term to encourage online buying at the start of the week and the holiday-shopping season.

Steely Dan recorded a song called Black Friday for their Katy Lied album in 1975. It's not about shopping but about any sudden financial-market crash and a transformed life. Donald and Walter chose Friday because the first half of the word sang better than any other day of the week. Here's Donald Fagen and Walter Becker performing Black Friday at the 2001Rock and Roll Hall of Fame after being inducted by Moby.

Here are the lyrics to “Black Friday," by Donald Fagen and Walter Becker: