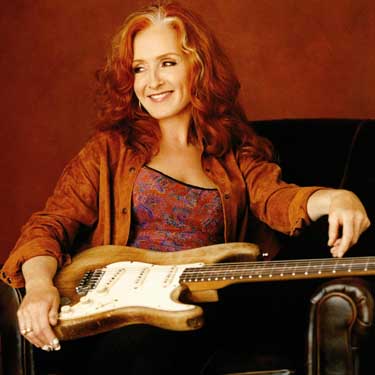 Bonnie Raitt and Taj Mahal Rock and Roll Hall of Famer Bonnie Raitt has been palling around with Harlem-bred bluesman Taj Mahal since the '60s, bonding through a mutual love of roots music.

But this is the pairs first tour together; they'll be co-headlining under the name BonTaj Roulet and will donate a portion of the proceeds to a variety of charitable organizations. Mahals tunes, which fold African and Latin influences into the blues, should be a lively counterpart to Raitts sensual melodies and expressive slide guitar both will play individual sets and then come together onstage for a buoyant finale.

At 59, Raitt can still belt out her sentimental ballads (I Cant Make You Love Me) and upbeat singalongs (Something to Talk About) as beautifully as shes been doing for forty years. Its like shes often told her audiences the blues never go out of style.

If Arcade Fire were a little more country and a little less Quebecois, it'd sound like fellow apocalyptic ensemble Telegraph Canyon. These Fort Worth, Texas, natives' banjo- and pedal steellaced compositions are velvety versions of Americana, laced together by Chris Johnson's strained voice.

On “Reels and Wires," from their debut album The Tide and the Current, long stretches of plucked banjo notes are broken by gentle guitar and piano chords. There's a sense of solitude in these songsa feat for a band that boasts seven members. Telegraph Canyon eschews foot-stomping and rabble-rousing for symphonic, dark melodiesthe kind of music that envelops you in sound and keeps you safe and away from the sadness that's all too close for comfort.

A key figure in the rise of the organ in jazz, as well as one of the architects of the soul-jazz sound, “Dr." Lonnie Smith (aka the Turbanator) is something of a jazz anomaly with his staunchly self-taught approach. Smith doesn't read music, so his playing tends to come from a highly individual headspace where personal expression and gut-level energy are favored over rote formula.

These days, thanks to younger groups that have latched onto the organ, the style that Smith helped pioneer has become familiar. But Smith remains a voice to be reckoned with. He is known for his assertive approach and colorful personality (the googly eyes, facial expressions, and turban certainly don't hurt), but he also stresses the need to hold back where appropriate.

It's not for nothing that Smith refers to the Hammond B-3 as “the monster," and his lyricism and dynamic control demonstrate why, decades after playing with the likes of George Benson, Jack McDuff, David “Fathead" Newman, and Lou Donaldson, he's still considered one of the prime ministers of his instrument.