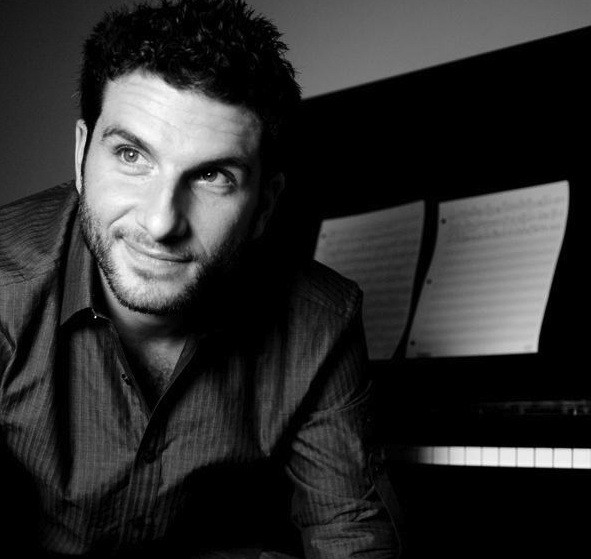 Building upon his highly responsive trio with bassist Luques Curtis and drummer Kendrick Scott, Collin has crafted a ravishing body of music featuring subtly textured flourishes added in post-production. An eagerly awaited follow-up to his acclaimed 2008 debut, The Calling is a quantum leap for Collin, a highly personal statement that embraces the musical currents that move him most deeply.

“My music ultimately focuses on solid writing and composition, on group improvisation and creating a distinct mood and atmosphere that listeners can lose themselves in," says Collin, 32. “When I'm improvising, I try to improvise within a specific piece of music as a real extension of the melody so it's an integral part of the piece."

Walking an unorthodox path requires finding the right collaborators. Collin has hit the jackpot. At 28, Curtis is one of the most sought after young bassists in New York City, a superlative accompanist who has already recorded with masters such as Eddie Palmieri, Brian Lynch, Christian Scott, Sean Jones, Gary Burton, and Dave Valentin. Scott is best known for his six-year stint with Terence Blanchard, but he also worked widely with heavyweights like Herbie Hancock, John Scofield, Maria Schneider, Wayne Shorter, Robert Glasper, Angelique Kidjo, Lionel Loueke, and Gretchen Parlato.

Produced by studio maestro Matt Pierson, who has helped shape albums by jazz's most distinctive artists (including Brad Mehldau, Joshua Redman, Taylor Eigsti and Mark Turner), The Calling features 10 Collin originals and his seductive arrangements of John Mayer's “Stop This Train" and Horace Silver's classic “Nica's Dream." Rather than demonstrating the trio's versatility with an eclectic array of grooves and structures, Collin has crafted a highly cohesive program that explores similar emotional terrain from a variety of perspectives.

The album opens with “Storm," a tempestuous piece that briskly establishes Collin's aural agenda. Rather than serving as a launching pad for solos, the tune sweeps through a series of overcast spaces, moods enhanced by the almost subliminal laying of processed vocals, keyboards and electric guitar. Rather than clearing the air, “Storm" gives way to the album's title track, an insistent, almost incantatory minimalist theme that builds to an ambiguously pacific resolution.

Reflecting his engagement with pop music and singer/songwriters, Collin decided to arrange “Stop This Train" just a few days before the recording session. Encouraged to tackle the piece by Pierson, he passed it out to the trio and ended up with a lovely rendition that stands as one of the album's highlights. If “Train" finds Collin with his heart on his sleeve, the angular “Pennywise the Clown" captures the pianist as trickster. With its mercurial stop and start melody, the piece makes multiple head fakes, showcasing Scott's exquisite trap set touch and inherent sense of structure.

Equally revelatory is Collin's haunting arrangement of “Nica's Dream." Reharmonizing the opening section, he maintains the spirit of the original while turning it into his own unsettling tale. He closes the album with the rueful “One Last Try," a solo piano excursion where half-hearted optimism gives way to resignation. It's another unexpected move on an album that constantly leaves listeners checking their emotional bearings.

For Collin, The Calling is much more a notebook than a manifesto. “It's not about a concept, it's just the sounds that made me feel good and I want to hear," he says. “The music doesn't come from a rational process, it's mainly the result of a combination of sounds from different genres."

While Collin's music reflects his unique vision, it can be seen as part of a sensibility shared by players like James Farm pianist Aaron Parks, saxophonist Tim Green, and pianist Robert Glasper. He's forged particularly close ties with like-minded contemporaries such as trumpeter Ambrose Akinmusire, saxophonist Walter Smith III and vibraphonist Chris Dingman, who all performed together internationally while earning a Masters Degree at the prestigious Thelonious Monk Institute.

Born in Cannes and raised in the nearby southeastern town of Antibes, Collin soaked up jazz at home listening to his mother's Oscar Peterson, Duke Ellington and Ella Fitzgerald albums. But he was also widely exposed to jazz via the celebrated Jazz à Juan festival, which featured many of the music's greatest improvisers.

“My house was five minutes from the jazz festival, so I got to see a lot of that growing up," Collin says. “I was studying classical music. As a young kid, I was always curious about jazz and improvised music."

He performed with a pop and rock band in high school, but with no jazz program and few peers interested in jazz, he had no one to explore the music with in person. When the time came to start college at 17, Collin honored his parents' wishes and enrolled in an international management program in the UK. But his love of music won out. “I always felt a need to listen constantly every day, and play whenever I could," Collin says. Upon discovering new practice rooms with good pianos “I was playing six to eight hours a day, and that's what I've been doing ever since."

It might sound like a formula for flunking out, but class attendance was optional as long as Collin kept up with assignments and tested well (which he did with some intensive cramming). He made enough progress at the piano to earn a full scholarship to Berklee, relocating to Boston in 2001. While he studied performance with masters like Dave Liebman and Joe Lovano, Collin majored in Music Synthesis, learning about sound design and synthesizer programming.

“I didn't want to be a jazz or performance major, I knew I'd be shedding eight hours a day anyway. I did the same thing in business school, kind of going to classes, doing okay, but mostly doing my own thing. I was never a tech geek, just wanted to get whatever information I needed."

He quickly put his skills to use, co-producing the critically acclaimed album Moving by Hiromi's Sonic Bloom bassist Tony Grey (one track, “White Woods," appeared on a Weather Report tribute album). Graduating in three years, Collin moved to New York City, but he almost immediately got the call to audition for the Monk Program. Selected by a panel including Herbie Hancock, Terence Blanchard and Wayne Shorter, he moved to Los Angeles for the two-year program, joining a prodigious cast of peers.

“Terence tried to have us compose as much as we could," Collin says. “He really stressed the importance of having a sense of focus, a theme that's always present through a piece."

His heralded debut album The Rise and Fall of Pipokuhn featured bassist Joe Sanders and drummer Zach Harmon, fellow Monk Institute alumni. Since moving back to New York City in 2009, he's gained recognition as a singular artist, “a visionary composer, an extraordinary jazz pianist and a very bright young rising star in the jazz world," in the words of Jon Weber, the host of NPR's PianoJazz.