This project, my 10th CD devoted to settings of poetry, is a logical extension of my previous excursions in to words, their meaning and sound. --Frank Carlberg 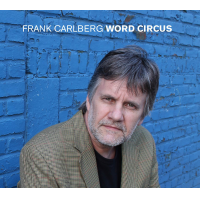 Brooklyn-based Red Piano Records is proud to announce the release of Word Circus by Frank Carlberg. This album features a stellar quintet of jazz and improvised music heavy-hitters such as Christine Correa, voice; John O'Gallagher, alto sax; Pascal Niggenkemper, bass; Michael Sarin, drums and Carlberg on piano. Word Circus is a collection of musical settings of poems by contemporary American writers such as Ron Padgett, Joe Elliot, Ken Mikolowski and Anselm Berrigan. Carlberg gives some insight in to the background of Word Circus: “This project, my 10th CD devoted to settings of poetry, is a logical extension of my previous excursions in to words, their meaning and sound. On Word Circus the poems range from light and humorous to existential musings, to meditative ruminations on the state of our world. Word Circus is a continuation of my fascination with American poets, which has informed my work for the twenty-plus years, beginning with the release of The Crazy Woman on Accurate Records in 1995."

The songs on Word Circus were written for this Quintet, which has with a few modifications been around since Carlberg's earliest efforts with text. About the vocalist Christine Correa Carlberg explains: “ Christine is the main reason for the existence of this group and this repertoire; my muse as it were. I have by now written over 150 songs with poems by writers such as Robert Creeley, Anselm Hollo, Anna Akhmatova, Rabindranath Tagore, Kenneth Rexroth, Allen Ginsberg, Alejandra Pizarnik etc as well as various other texts such as excerpts from Bill Clinton Grand Jury testimony, fragments from medical journals, pieces from legal documents, cut-up versions of the Bill Of Rights etc. All this work would never have happened had I not had a voice to compose for. Christine Correa provided me with that voice. She was able to execute whatever lines I would dream up and she was able to infuse the words with powerful expression and emotion. The rest of the group has remained remarkably stable as well with drummer Michael Sarin working with us since the “In The Land Of Art" project (Fresh Sound New Talent) in the late 1990's. John O'Gallagher has worked with us since the “Uncivilized Rumination" CD about 6 years ago. Pascal Niggenkemper is a relative newcomer who stepped in to this project after longtime collaborator John Hébert was unable to participate because of schedule conflicts. This group is really a dream come true for me as these musicians are all completely committed to the music while bringing such strong personalities and remarkable musicianship to the plate. A real composer's paradise"

The compositions for Word Circus were commissioned by Chamber Music America through their New Jazz Works program.

The songs on Word Circus cover a broad range of moods and emotions. The opening track “You & Me" has a short text with some existential over(under)-tones. The poem by Ken Mikolowski is from a series of poems that he wrote titled “Ecology". After a brief F-pedal tone the band throws itself into the declamatory melody with reckless abandon. The melody is followed by a piano solo with bass and drums interjecting in free-time. After a short reappearance of the melody, now as an interlude, a sax solo over a relentless up-tempo pulse by the rhythm section is a flight of brilliantly constructed ideas at breakneck speed. For Even If the pace slows down to a luxurious ballad with a witty, matter-of-fact text by Joe Elliot. It is delivered with intensity while maintaining a certain casual nonchalance. After a melodic bass solo and a playful piano statement Correa re-enters with added urgency. A sax/drum duet leads seamlessly in to On Some Level with an acerbic text by Ron Padgett, one of the great living American poets. The song is performed in an understated way, drawing the listener in to its tiny little verbal labyrinth. The music picks up steam on “Things To Do In An Economic Crisis" (by Ken Mikolowski) with its simple recommendation: “Buy Low/Stay High." The band is turbo charged on this one as sax and piano exchange ideas while the rhythm section propels forward with fearless ferocity. After a short recap of one of the opening melodic statements the Niggenkemper takes over and leads us in to Ecology with a text once again by Mikolowski. After a chant-like vocal opening, Carlberg has a solo that seems to express a certain wistful sweetness before gradually building intensity, culminating in a section of powerful vocal wailing before a return of the somber mood of the opening.

The next song, Stop Telling Me, voices a complaint. The poem is by Anselm Berrigan and states: “Stop Telling Me/ I look tired/ I know what I look like/ Tell Me How I Feel". After an edgy and angular melody the band forges into a collective improvisational give and take before the return to the opening melody, which in turn serves as an interlude leading in to an extended drum solo by the masterful Sarin. His solo eventually sets up the closing track, Lullabye. With its gorgeous text by Ron Padgett and the luscious music it serves as a perfect and calming end to this exhilarating set.

With Word Circus, his 10th recording of settings of poetry and text, Carlberg has taken yet another step forward in establishing himself as quite possibly the leading current exponent of combining poetry and jazz. Not since the remarkable oeuvre of the late great Steve Lacy has there been such a sustained and satisfying effort in creating connections between these two spectacular art forms. And make no mistake: this is not just beatniks in berets reading with a backdrop of flutes and bongos. This is an organic effort born out of commitment, passion, skill and vision to both mediums.