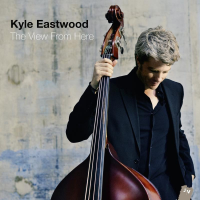 It has been 15 years since bassist Kyle Eastwood burst onto the jazz scene with his 1998 debut, From There To Here. At that moment in his budding career, the press seemed more preoccupied with his paternal lineage (he’s the son of famed actor-director Clint Eastwood) than his music. Over the course of the four subsequent releases – 2004′s Paris Blue, 2005′s Now, 2009′s Metropolitan and 2011′s Songs from the Chateau – Eastwood built up an impressive body of work while earning respect in musician circles. With his sixth release as a leader, The View From Here on the JazzVillage label, he demonstrates a strong command of both electric and upright basses while expanding into more adventurous territory that is informed as much by jazz as it is by world music. “I’ve always loved music from other countries,” says the Carmel, California native who has resided in Paris for the past eight years. “Living in France, you hear a lot of North African and Middle Eastern music, and you can hear some of those influences on this new recording.”

Accompanied by a London-based crew of stellar young musicians worthy of wide recognition — pianist Andrew McCormack, tenor saxophonist Graeme Blevins, trumpeter Quentin Collins and drummer Martyn Kaine — Eastwood and company blend infectious grooves and outstanding improvisations throughout eleven diverse tracks on The View From Here. “They’re all really talented players,” says Eastwood, “and we’ve been playing together for a while now, developing a real band chemistry. We ended up writing a lot of these new tunes together either at rehearsals or out on the road during last year’s tour around Europe. Sometimes I would come up with a couple of ideas or Andrew might bring something in, then everybody would just add on to it after that.”

That cooperative process would culminate in several co-written compositions on The View From Here. The album kicks off with the percolating, polyrhythmic “From Rio to Havana,” which shifts nimbly back and forth from clave-fueled groove to subtle samba rhythms. Blevins and Collins forge a tight frontline, each also contributing bold, swaggering solos to the proceedings, while Eastwood bubbles underneath on electric bass. McCormack’s catchy son montuno piano riffing at the tag brings this bristling opener to a Latin jazz conclusion. The mellow “For M.E.,” written for Eastwood’s mother, Maggie Eastwood, is a loping, melodic number that features the bassist stretching out on an expressive electric and cleanly executed solo midway through. Collins, who demonstrates some of the high note bravado of a Lee Morgan or Freddie Hubbard throughout the recording, turns in another potent solo on this moody number.

The rhythmically tricky title track hinges on a catchy ostinato figure played in unison by Eastwood on electric bass and McCormack’s left hand piano lines. Frontline partners Blevins and Collins float in half time on top of that urgent undercurrent, creating a dreamy effect. Pianist McCormack pushes the harmonic envelope on his brilliant solo here while Collins takes his time building to a bristling high-note crescendo on his solo. Blevins adds some of his own with a smoldering tenor sax solo. “Sirocco,” named for the wind that blows across the Mediterranean from North Africa, opens with a blend of flamenco handclaps and Eastwood’s mesmerizing pulse on upright bass before segueing to the lyrical theme provided by the tenor-trumpet frontline. McCormack freely explores on this tempo-shifting vehicle while Collins turns in his most lyrical solo on flugelhorn. Eastwood also shows his agility and chops on the upright in an impressive bass solo here. The mysterious “Luxor” opens with drummer Kaine playing hand percussion alongside Eastwood’s bubbling electric bass lines as Blevins and Collins blow haunting long tones over the relaxed groove. Collins turns in an outstanding double time solo on this slowly evolving number that definitely harkens back to his trumpet hero Freddie Hubbard. Midway through the piece, the band drops out leaving pianist McCormack to explore in dramatic fashion. “Andrew and I wrote that together in my apartment in Paris,” explains Eastwood. I guess we were going for a little of the ‘Tutu’ vibe on that one,” he adds, referring to the title track of Miles Davis’ landmark 1986 album produced by bassist-composer Marcus Miller.

The buoyant, African flavored “Une nuit au Sénégal” throbs with an upbeat dance energy and also unleashes Collins and Blevins on some exhilarating call-and-response over the infectious Afro-beat groove created by Eastwood’s electric bass and Kaine’s insistent backbeat. Eastwood also flashes some accomplished slap bass chops on his extended solo here. On the intricate 6/8 vehicle “The Way Home,” Eastwood digs in on his woody-toned upright alongside Kaine’s insistent beats, providing a deep foundation for Australian-born tenor saxophonist Blevins to build a monstrous solo that reflects some of the passionate intensity of his New York mentor, saxophonist Chris Potter.

The evocative ballad “The Promise” is based on a haunting theme played by trumpeter Collins and repeated by Blevins on soprano sax. “That’s another one that Andrew and I wrote together during the same session where we wrote ‘Luxor,’” says Eastwood. “We were just hanging out in my apartment, coming up with melodies. This one originally started out as a Paco de Lucia kind of thing but it eventually developed into what you hear. It’s kind of screaming for a film soundtrack or something.” Eastwood carries the melody of the moody “Mistral” on electric bass. As the piece develops, it gradually builds to a heightened crescendo with explosive simultaneous soloing by trumpet and tenor sax. The opening salvo of harmonics that kicks off Eastwood’s “Summer Gone” immediately triggers memories of the late, great electric bass virtuoso, Jaco Pastorius. As Eastwood says, “There’s always some of Jaco’s playing creepin’ in. He was definitely a big influence when I first started playing electric bass.” Eastwood flaunts his impressive facility on an extended electric bass solo on this lone piano trio offering while McCormack also takes off on another harmonically provocative excursion on his extended piano solo.

The collection closes on a funky note with the earthy, Meters flavored “Route de la Buissonne,” underscored by Eastwood’s old school upright bass groove in tandem with Kaine’s laid back, New Orleans flavored second line groove. Eastwood digs deep on his solo here, revealing the influence of Ray Brown, an important mentor in his early developmental years as a bassist. “I started on electric when I was in high school, just sort of teaching myself,” recalls Eastwood. “Then I studied for a few years with Bunny Brunel, who was an important teacher for me. He made me learn to read music and he actually got me started on the acoustic bass as well, studying classical bass. Then I took a few lessons with Ray Brown, learning about playing time and walking and stuff. Everything I do on upright bass now that has to do with groove or walking comes from Ray.”

In addition to his six solo albums, Eastwood has also contributed music to eight of his father’s films: The Rookie (1990), Mystic River (2002), Million Dollar Baby (2004), Flags of Our Fathers (2006), Letters from Iwo Jima (2006), Changeling (2008), Gran Torino (2008) and Invictus (2009). And while he takes pride in those credits, his most personal, fully realized and rewarding project to date is his current quintet offering, The View From Here.