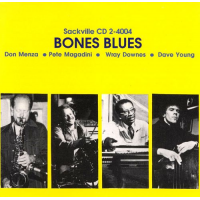 The 1970s were a no-man's land for acoustic jazz. The rise of album rock, arena concerts and electronic instruments led to the growing popularity of psychedelic jazz-rock fusion and funk, especially on college campuses. Many jazz labels during this period tended to put much of their budgets behind the new forms, since they commanded the largest slice of sales. The siphoning of budgets and staff to the electric side meant that many acoustic jazz recordings tended to be rambling, boring bop and hard-bop albums.

One of the more dynamic acoustic exceptions was drummer Pete Magadini's Bones Blues. Recorded in August 1977 in Toronto for Canada's Sackville label, the album featured tenor saxophonist Don Menza, Wray Downes on piano, Dave Young on bass and Magadini on drums. Much of the excitement comes from the interplay between Menza's fierce attack on up-tempo numbers and Magadini's driving rhythms. On ballads, the musicians grab your ear with depth and passion.

The album's songs are Old Devil Moon, Freddie Freeloader, Poor Butterfly, Solar, I Remember Clifford, What A Time We Had, Bones Blues and an alternate take of Freddie Freeloader. Each song delivers a different side of Menza's personality, and Magadini throughout has firm control of the rhythm touches. Downes is a splendid and formally trained Canadian pianist and Young provides woody support.

Born in Great Barrington, Mass., in 1942, Magadini moved with his famiily to Palm Springs, Calif., when he was 6. In 1960, he studied drums at New York's Henry Adler Drum School and then attended the San Francisco Conservatory of Music, graduating in 1965. He soon formed a trio with keyboardist George Duke. In 1969, Magadini moved to Los Angeles and played with Don Menza. He then played behind pop artists Bobbie Gentry and Diana Ross before heading off to the University of Toronto, receiving a Master of Music degree in 1973. By the late 1970s, he was playing routinely with Menza, Downes and Young.

Someone should get these guys back together again.