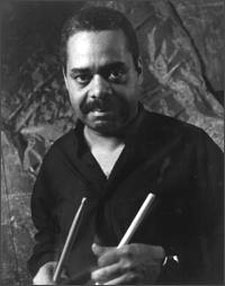 Steve Berrios is an innovative drummer/percussionist well-known to aficionados of Latin jazz. His groundbreaking work with Jerry Gonzalez and the Fort Apache Band, numerous sessions as a sideman, as well as his two solo albums - First World (Milestone, 1995) and the Grammy-nominated And Then Some (Milestone, 1995) - show a body of work that is a unique amalgam of hard bop, Latin jazz and Afro-Caribbean folkloric rhythms.

With a swing feel as greasy as Elvin Jones, a vast knowledge of Afro-Caribbean rhythms, accomplished tympani and marimba work, and even the ability to kick a backbeat, you'd be hard pressed to find another drummer with a more thorough knowledge of the percussive arts. Hopefully many of the musicians such as Berrios, who were developing during the middle age of jazz, are too young to be in the pantheon of the founders of jazz and too old to be darlings of the critics, will ultimately get their due.

AAJ Contributor Mark Merella spoke with Berrios at great length, for a career-covering interview that reveals as much about where the percussionist came from as where he's going.