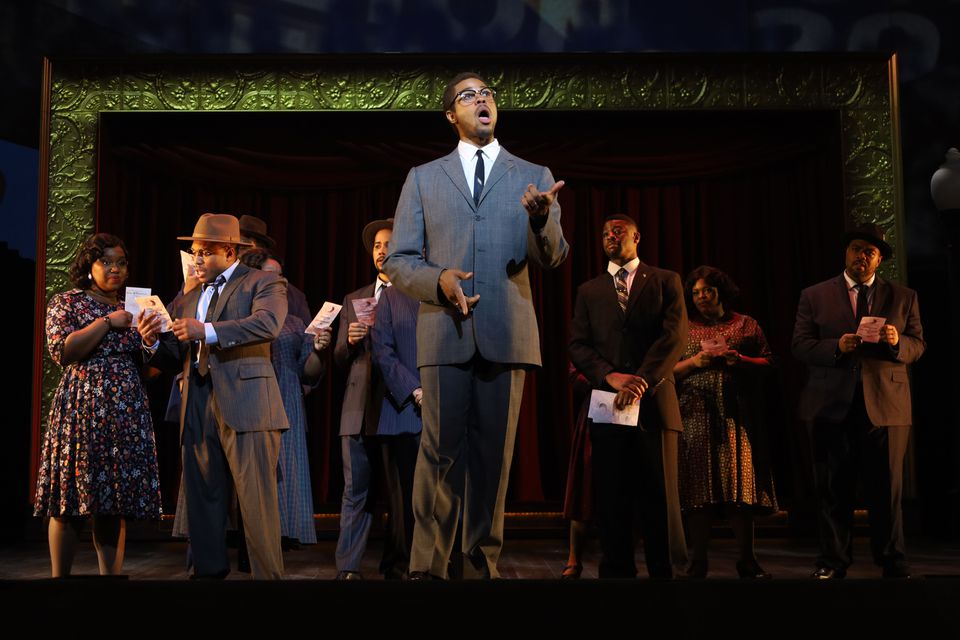 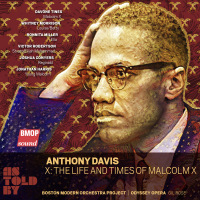 “The work is gripping, and it is unlike any other opera... X is a work that deserves to enter the American repertory... not just a stirring and well-fashioned opera but one whose music adds a new, individual voice to those previously heard in our opera houses.” —The New Yorker

“A riveting and uncompromising work” —The New York Times

Known as the nation’s foremost label launched by an orchestra and devoted exclusively to new music, Grammy Award-winning BMOP/sound today announced the world premiere recording of the revised version of Anthony Davis’s seminal opera X: The Life and Times of Malcolm X (TBR, 2022), along with a companion curriculum guide. This past summer in Boston’s historic Strand Theatre, just blocks away from Malcolm X’s childhood home, conductor/producer Gil Roseled the Boston Modern Orchestra Project (BMOP), celebrated bass-baritone Davóne Tines (embodying the title role of Malcolm X), a stellar cast of today’s top singers, and the Odyssey Opera chorus in a groundbreaking recording session that cements X as one of the great American operas of the 20th century and inaugurates an historic series of recordings from BMOP/sound.

After lying dormant for 36 years following its New York City Opera premiere, X was recently resurrected, with performances by Detroit Opera and BMOP to be followed nationwide by Opera Omaha, Seattle Opera, Lyric Opera of Chicago, and the Metropolitan Opera (to be presented in 2023-24 season). According to composer Anthony Davis, winner of the 2020 Pulitzer Prize for Music for The Central Park Five, there is no better time than now to revive X. “It has been over three decades since the premiere of X. Malcom X’s vision is as prescient today as it was in 1986,” says Davis. “He is an inspiration for Black Lives Matter and the movement for social justice. As a composer, I am thrilled to help create X as an opera for today that speaks to the future as well as the past.”

According to Gil Rose, Founder and Artistic Director of both BMOP and Odyssey Opera, “It was exciting to work with Anthony to record this updated version of X. There is no better way to celebrate contemporary Black creativity than with the resurrection of such a monumental work composed, written, performed, and recorded by Black artists. We are thrilled to be able to share this major opera with the world.”

A collaborative effort by Davis, his cousin Thulani Davis, who wrote the libretto, and his brother Christopher, who conceived the story, the operadepicts Malcolm X (1925-1965), one of the most misunderstood men in history. It is a sprawling genre-bending biographical opera that unfolds Malcolm X’s galvanic life and career in three acts of fast-moving jazz-infused vignettes. Recently completed revisions to the score (as heard in this recording) reflect Anthony Davis’s updated views on the opera.

Audiences and critics alike hailed the June 2022 New England premiere of X presented by BMOP and Odyssey Opera.“BMOP and Odyssey Opera are engaging with the country’s racial reckoning through the prism of opera. Unlike your standard history textbook, an opera such as ‘X’ asks us not to memorize the past but to re-encounter it, to relive these moments as if in real time—only in this case, the meanings of that history can be expanded and deepened by all the intensifications, shadings, and perspective that an inspired score can bring, churning beneath the surface of the words. The result, in its best moments, can be a new dimensionality for both past and present.” (The Boston Globe)

This recording of X is the first in a series released over the next five years as part of As Told By: History, Race, and Justice on the Opera Stage, BMOP’s multi-year initiative elevating and celebrating Black creativity in opera. Each of the recordings of As Told By will be accompanied by a companion curriculum guide developed by the Boston-based chamber music and educational group Castle of Our Skins. Access to the curriculum guide is free, and a special CD discount is available for educators. Says Ashleigh Gordon, Executive and Artistic Director of Castle of Our Skins, “This curriculum guide provides multiple angles to engage the life and legacy of Malcolm X, as befits such a dynamic and complex figure. We hope the CD and guide open wide-ranging conversations about both this opera and its subject.”

About As Told By

The Boston Modern Orchestra Project (BMOP) is the premier orchestra in the United States dedicated exclusively to commissioning, performing, and recording music of the twentieth and twenty-first centuries. A unique institution of crucial artistic importance to today’s musical world, BMOP exists to disseminate exceptional orchestral music of the present and recent past via performances and recordings of the highest caliber. Founded by Artistic Director Gil Rose in 1996, BMOP has championed composers whose careers span nine decades.

Each season, Rose brings BMOP’s award-winning orchestra, renowned soloists, and influential composers to the stage of New England Conservatory’s historic Jordan Hall in a series that offers orchestral programming of unrivaled eclecticism. Musical America’s 2016 Ensemble of the Year, BMOP was awarded the 2021 Special Achievement Award from Gramophone Magazine as “an organization that has championed American music of the 20th and 21st century with passion and panache.” The musicians of BMOP are consistently lauded for the energy, imagination, and passion with which they infuse the music of the present era. For more information, please visit BMOP.org.

Founded in 2013 by artistic director/conductor Gil Rose, Odyssey Opera presents adventurous and eclectic works that affirm opera as a powerful expression of the human experience. Its world-class artists perform the operatic repertoire from its historic beginnings through lesser-known masterpieces to contemporary new works and commissions in varied formats and venues. Odyssey Opera takes its audience on a journey to places they’ve never been before. odysseyopera.org