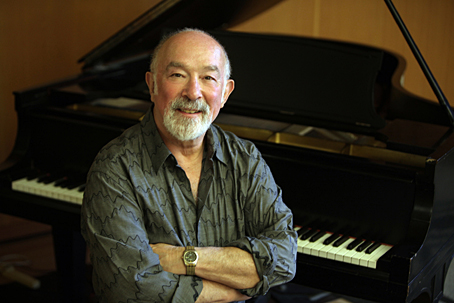 slideshow
Grammy-nominated pianist Mark Levine was introduced to the music of Moacir Santos in the late 1960s, when he had the good fortune to work with the Brazilian composer. Now Levine is preparing to release a tribute album in Santos’s memory on his own Left Coast Clave label.

The new CD, Off & On: The Music of Moacir Santos, made with Levine’s Afro-Caribbean ensemble The Latin Tinge, is scheduled for release on September 15. “This is something I’ve wanted to do for 35 years,” says Levine. “Moacir is the greatest Brazilian songwriter of the 20th century, and he is emphatically not just about bossa and samba. In fact, the new album is Brazilian music played with an Afro-Cuban slant. A lot of the arrangements are pure rumba clave.”

Off & On is the fourth recording by the Latin Tinge, formed by Levine in the late 1990s and featuring the dazzling rhythm section tandem of Paul van Wageningen on trap drums and Michael Spiro on hand percussion; bassist John Wiitala; and Brazilian-jazz veteran Mary Fettig on reeds. The album opens with what is probably Santos’s best-known composition, “Nanã,” as a boogaloo, while the rest of the album, Levine says, is “pretty faithful to Moacir’s arrangements,” even with the unmistakable Latin tinge.

Moacir Santos (1926-2006) was born in the rural northeastern state of Pernambuco, Brazil, and came to Los Angeles in 1967 seeking work as a film composer. Levine met him in the late 1960s and did some local gigs with him, and was later invited to play on Santos’s 1974 Blue Note album Saudade, one of three dates the composer made for that label. They failed to find an audience. It was toward the end of his life that Santos’s music achieved wider recognition through the efforts of producers Mario Adnet and Ze Nogueira, who organized the critically acclaimed albums Ouro Negro (2002) and Choros & Alegria (2005).

“I think Moacir is truly a world musician,” says Levine, “in that he’s able to combine all sorts of different things together. There’s a tremendous amount of layering in his music. Even though Brazilian music and Cuban music both came from the same part of Africa, obviously they evolved differently in Brazil and in Cuba. So we’ve got a combination of three different types of Western hemisphere music with an African background—Brazilian, Afro-Cuban, and jazz. To me, that’s the essence of world music: different genres of music combined to form essentially a new genre.”

Based in the Bay Area since 1974, Mark Levine currently divides his time between the Bay and Boise, Idaho. As the author of the best-selling instruction manuals Jazz Piano Book and Jazz Theory Book (Sher Publications), and as a founding faculty member of the Jazzschool in Berkeley, Levine has a national reputation as a distinguished music educator. In addition to his prodigious Latin-jazz explorations (with his own groups and with Mongo Santamaria, among others), Mark has an equally impressive mainstream jazz rsum, having worked with artists including Joe Henderson, Stan Getz, Bobby Hutcherson, Harold Land, Blue Mitchell, and Woody Shaw.

Earlier this year, Levine released a straight-ahead trio session—Exact Change (Jazzschool Records)—with bassist Peter Barshay and drummer Mike Clark. But his primary focus now, with the release of Off & On, is the music of Moacir Santos, and he is hopeful that the new CD will be instrumental in bringing Santos’s musical genius to the attention of the American public.

Mark Levine & the Latin Tinge will be performing the material from Off & On at Senzala in Sunnyvale, CA on 9/12 and at the Jazzschool in Berkeley on 9/20. A West Coast tour is planned for the fall.