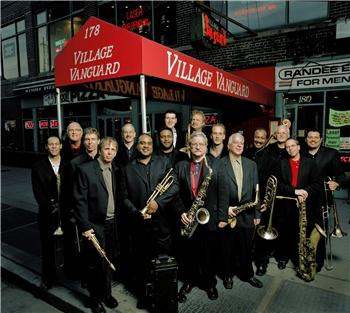 One of the most enduring jazz ensembles in the history of the art form continues to contribute to the jazz canon and advance the language of music.

The live recording at the august and famous jazz club follows five critically acclaimed studio recordings that have garnered seven GRAMMY nominations, one AFIM award and one GRAMMY win.

The new CD was recorded on February 10 and 11, 2008 after a full week of performances at the club dedicated to the legacy of Thad Jones and Mel Lewis. The double disc recording features classic Thad Jones compositions that have been lost for over three decades. The restoration of this music has been supported by the American Music Center, The National Endowment for the Arts (NEA) and the National Association of Recording Arts and Sciences (NARAS).

While Thad Jones was the core of the creative output for the ensemble, there were other contributors that etched creative marks on the band. Jerry Dodgion, Bob Brookmeyer and Jim McNeely represent key contributions during various phases of the orchestra's existence. The new CD features unrecorded music of McNeely, Dodgion and two stunning arrangements by Brookmeyer.

The artistic reputation of the Thad Jones/Mel Lewis Jazz Orchestra is universal. The music has influenced thousands of artists and has reached tens of thousands of listeners worldwide through recordings and live performances. The Vanguard Jazz Orchestra maintains the reputation and continues to influence both performers and listeners. The VJO maintains the highest artistic integrity and continues in the cutting-edge tradition of founding members, Thad Jones and Mel Lewis. With the music of Thad Jones, the VJO has one of the most important jazz libraries worldwide. It also has one of the most innovative and diverse repertoire books with contributions from some of the finest names in jazz.

From their regular Monday night gig and international performance schedule, to their historical cultural exchange tours (the Soviet Union in 1972; Tunisia in 1998 and Egypt in 2000) the band has always been on the artistic cutting edge. In it's forty-two year history the orchestra has established itself as one of the leading exponents of jazz orchestra music by balancing tradition with innovation.

Michael Weiss, piano on Mean What You Say, St. Louis Blues, Mornin' Reverend, Kids Are Pretty People, The Waltz You Swang For Me