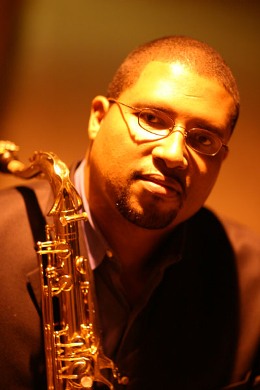 slideshow
New York, NY -- Nu Jazz Entertainment --a long time producer of high quality audio and video content in the genre of jazz—is announcing the launch of a Grammy Listening Area
on their website for 2009 NARAS voting members to hear the first round nominee Jimmy Greene : The Overcomer’s Suite --a new album from award-winning saxophonist, Jimmy Greene , on their Nu Jazz Records label.


Bold…. Daring…. Inventive… All of these words describe Jimmy Greene’s brand new album, The Overcomer’s Suite (NJE #1001, #1003), on Nu Jazz Records. The inaugural release, on the new label, formed by Nu Jazz Entertainment in 2008, shows the full depth of Jimmy Greene’s prowess--as both performer and composer--while performing on both tenor and soprano saxophones. Accompanied by a star studded cast of performers-- Xavier Davis on piano, Luques Curtis on bass, and Kendrick Scott on drums--this recording is poised to become one of the most important musical statements yet from Jimmy Greene. Now 2009 NARAS voting members can stream the entire album online at their convenience to hear the album in time to submit their voting selections by November 5, 2008. To log on simply visit the B2B section of the labels website or click on Grammy Listening Area.

Recorded live at Firehouse 12, in Jimmy Greene’s hometown of Hartford, CT--this project catches the quartet, in both audio and video formats, at their best. “Jimmy Greene is one of the greatest saxophonists to emerge on the scene in the last 15 years”, says label president, Jerald Miller. “We are delighted to showcase his talent in our inaugural release.”

Now a distinguished leader in the next generation of jazz heroes, the 33 year old Hartford, CT native’s creativity and drive have not diminished one bit since he burst onto the scene at the 1996 Thelonious Monk Institute of Jazz International Saxophone Competition. From his rousing tribute to Ornette Coleman in “Anthem of Hope"--to the angular melodic lines, and intricate harmonies of his four-part epic saga, “The Overcomer’s Suite"--to the poignant piano/sax duet dedicated to the memory of Jackie Mclean, “I’ll Keep Loving You," Greene shows he’s not afraid to take chances.

“The Overcomer’s" is a suite of compositions in four movements”, says Jimmy Greene. “Each movement depicts a person who, in God’s care, overcame a daunting task, trial, or situation. The first movement is written for my wife, and is called “Nelba’s Victory." The second movement is “Song for Isaiah," written for my firstborn son. The third movement, Gethsemane --inspired by New Testament scripture--depicts Jesus’ prayer in the garden by that name. The last movement, “David Undaunted," depicts young David’s epic battle with Goliath. Everything is tied together by groove. Each movement has a core rhythmic foundation that provides a basis for group interaction.”

Greene’s sidemen (Xavier Davis, piano; Luques Curtis, bass; Kendrick Scott, drums) provide a kaleidoscope of activity that demonstrates a shifting, but stable, countenance to the twisting, melodic themes, with metric changes and tempo shifts. The Overcomer’s Suite released exclusively for digital download, in both audio and video formats--from both the label’s website, and via over 450 digital music outlets, in over 50 countries.