These musicians were and are a high point in my endeavors. My one regret with this band is that we didn't record more.
—Mark Lewis 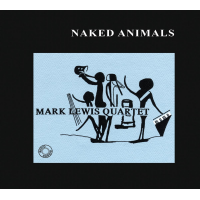 slideshow
Alto saxophonist/flutist Mark Lewis revisits a chapter from his own musical history on Naked Animals, set for an April 2 release on the Audio Daddio label. Recorded in 1990, the album features eight original compositions performed by Lewis’s Dutch quartet, the working unit he maintained through most of his 14-year residency in Rotterdam: pianist Willem Kühne, bassist James Long, and drummer Frans van Grinsven.

A native of Washington State, Lewis was all of 20 years old when he settled in the Netherlands in 1978. Shortly thereafter he formed the quartet to focus on his original compositions; with the above lineup locked in by the early 1980s, the band gradually built a popular following across Holland. “These musicians were and are a high point in my endeavors,” says Lewis today. “My one regret with this band is that we didn’t record more.” Indeed, Lewis only recorded the Dutch quartet twice, with Naked Animals coming near the band’s final days.

Yet despite its being more than 30 years old, Naked Animals is no historical curio. It is a vital, hard-swinging piece of music that sounds as fresh and exciting as if it was recorded yesterday. The rhythmic tensions of “Mercurian Rendezvous,” “Naked Animals,” and “City Slicker” are remarkably contemporary post-bop, whereas the refined ballad “A Dance with Monique” and the blues-redolent “The Seven Angels” draw on the classic, foundational elements of the art form. Hipness, Lewis and the band suggest, knows neither geographical nor temporal boundaries.

Naked Animals is also timely in a more roundabout, coincidental sense. It was recorded thirty years, almost to the day, before Lewis’s last pre-pandemic performance. Combined with the ageless character of the music, it serves as a stark link not only to past triumphs but to future possibilities for—as van Grinsven succinctly puts it in the album’s notes—“Adventurous, surprising and creative art!”

Mark Lewis was born January 26, 1958 in Tacoma, Washington, and grew up outside nearby Gig Harbor. Profoundly visually impaired, he made sense of the world through music—especially the jazz records in his parents’ sizable collection. At the age of nine he began playing music himself, starting on his grandfather’s C melody saxophone and switching to his uncle’s old alto a year later.

Starting his first band while still in middle school, Lewis was leading several by the time he finished high school (in addition to playing in the school’s stage and concert band and performing music for school plays). He studied composition, flute, piano, and electronic music at Western Washington University and at Seattle’s Cornish Institute of Allied Arts.

Even big-city Seattle could not keep him, however, and in 1978, at 20 years old, Lewis flew to Europe. He made a home in Rotterdam, the Netherlands, where he made himself a force on the local, national, and international jazz scene. He led three working bands—an organ trio, a world-jazz quintet, and the progressive quartet heard on Naked Animals—as well as creating a highly regarded record label, Audio Daddio, with Lewis himself as the house producer.

At the same time, Lewis made frequent trips back to the United States, continuing to work in Seattle and also establishing himself firmly on the Bay Area jazz scene, where he settled after returning to North America for good in the mid-1990s. He worked with the likes of Randy Brecker, Donald Bailey, Ted Gioia, Mark Levine, Bobby Hutcherson, and Larry Grenadier before returning to Washington to be closer to his family.

Lewis is a dizzyingly prolific musician, with more than 30 albums and an astounding 1,700 plus compositions to his name. His most recent document of his work, 2017’s The New York Session, was an acclaimed album featuring the all-star rhythm section of pianist George Cables, bassist Essiet Essiet, and Victor Lewis. Naked Animals, however, is an important (and heretofore dormant) installment in Lewis’s career, showing that he has long been able to hold his own with artists of such high caliber. It is a testament to what he is able to achieve when surrounded by “great musicians who loved the music. It’s not always easy to find musicians who really dedicate themselves to your music.”