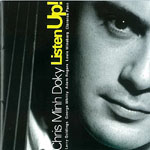 Traditionally, jazz bassists act as the wingmen for the leading musician. Establishing a steady beat so the other instruments can fall back to the original structure of the song, the bass serves as the backbone of the group. Its soft and persistent reverberations keep the other instruments tethered to the ground as they each explore their respective flights of fancy. Chris Minh Doky is one such jazz bassist, but in lieu of backing his group, he leads them, proving that tradition oftentimes should not dictate how everything should be. Doky's improvisational technique renders the bass into an uncharacteristically nuanced instrument on par with the guitar or even the piano. This did not originate with Doky however; apparently there is a Danish practice in which the lead instrument is the acoustic bass. His album Listen Up! showcases his exemplary skill in further redefining a genre already known for its tendency to break convention.

Although the album is without question of the jazz genre, the tracks are all fairly unique in mood and execution. “Asiacanese" starts off with a distinct Oriental vibe which progressively mounts into a frenetic bass solo that leaves the listener breathless. “Rain" starts off with the bass immediately before the other instruments are incorporated. This is a premier demonstration of the bass serving both as a melody establisher and improviser. The later inclusion of the acoustic guitar adds further depth to the piece reminiscent to the Spanish guitar stylings of Jose Gonzales. “The Dapper King" and “Rocks" provide more upbeat tracks in the album with the noticeable inclusion of the synthesizer. And although these tracks have their own separate appeal, it's safe to say that Doky's strengths lie in his lower tempo, mellow pieces. “Doky Polky" is definitely of the upbeat variety but the employment of steady rhythmic percussion and the acoustic guitar sets it apart from the rest as the musicians take a “folksier" direction with this piece.

Generally, most of the tracks in “Listen Up!" are purely instrumental. “Cantaloupe Island" proves the exception however with the inclusion of an exceptional vocalist with a voice that beckons and demands immediate attention. “Eternally" is another case, invoking a slightly more subdued mood than “Cantaloupe Island" one would reserve for an intimate dinner or a quiet night. Doky's bass fills the space between the vocalist's pauses with gentle pluckings as the other instruments accentuate the sung portions of the track, exuding a more soul inspired strain than jazz. If only one word could be used to describe this album, it would be variety. Doky isn't afraid to explore different approaches in order to create a whole spectrum of moods in “Listen Up!." The other musicians in his group prove just as imaginative in their respective instruments of choice. This carefully arranged album is by no means one that will lull you at any given moment. If you're a first time listener, be prepared to find something special for a number of different occasions and situations.

For a taste of Chris' songs hear Listen Up! songs.