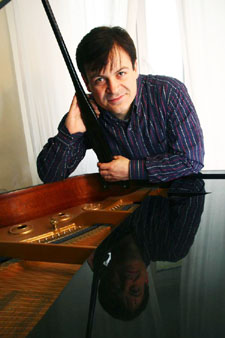 “At the heart of any true jazzman is the ability to tell his own musical stories in his own way, and hopefully touch a few hearts along the way. Down in his heart, there's a song he can feel, something that no one can steal. It's his own tune, all and in part. Pianist Antonio Ciacca dances to the unique songs in his heart." --Todd Barkan, Jazz at Lincoln Center

More than an exceptional album, Antonio Ciacca's Lagos Blues (Available January 12) is a mirror that reflects the broader story of jazz, its international reach as well as its inclination to come back and nourish at its American wellspring.

Steve Grossman (pictured at left) has been living in Italy since the 1970s, teaching and playing locally. His rsum includes the honor of having replaced Wayne Shorter in Miles Davis' group as a teenager and work with other giants of jazz including Elvin Jones, Michel Petrucciani, Cedar Walton and more. His decision to settle in Bologna seems, in retrospect, like fate putting the pieces in place for him and Ciacca to meet. Ciacca attended the Bologna Conservatory and Grossman became his mentor.

Ciacca (pictured at right) set two days aside for his mentor to join him and his regular quartet in a studio at Bologna. There, they recorded Lagos Blues , a set of originals by Ciacca and Grossman along with several standards. From start to finish, Lagos Blues respects advice bestowed upon Ciacca by another friend and mentor, his Lincoln Center compatriot, Wynton Marsalis, to first and foremost add to each player's strengths and to respond to what the others are playing.

Following this mandate, Ciacca presents a textbook example of this art form being practiced at its highest level. One of the crucial arrangement decisions that allowed these musicians to thrive was for both Grossman and Dillard to stick to tenor sax.

“Steve always loved to play with another tenor player, probably because of his experience with Elvin and Dave Liebman," says Ciacca. “But there's a long history of dual tenors: Johnny Griffin playing with Eddie 'Lockjaw' Davis, Lester Young and Hershel Evans, 'Hawk' and Ben Webster, Albert Ammons and Sonny Stitt, 'Newk' and 'Trane.' I love the vibe of a young musician like Stacy getting together with an icon like Steve and the way they discover each other."

Ciacca laid a lot of groundwork prior to the session, for example coming up with an arrangement of a tenor-sax classic, “Body and Soul," based on analyzing eight or ten versions of the tune and weaving elements of each into his own statement. In the end, though, the magic of Lagos Blues is in the moment - when the tape rolled and the performance began.

Born in Germany, raised in Italy, Ciacca plays with a rare blend of earthiness, fire and intellect, with elements of Wynton Kelly, Red Garland and Bobby Timmons that recall the most creatively vital and yet oddly neglected schools of jazz.

That's not to say that he's a nostalgist - far from it. As Director of Programming for Jazz at Lincoln Center, Ciacca serves this music on multiple levels - as a player whose sound is unique, especially in the context of our time, and as an educator who knows that to spread the word about jazz, the best thing is to let the music speak for itself.

Ciacca began his studies at the Bologna Conservatory. At the time he played only classical repertoire, the effects of which led him to consider switching his energies to sports and becoming a professional soccer player. This all changed when his future Lincoln Center compatriot (Marsalis) came to Bologna give a concert.

“What impressed me was the relationships between the musicians," Ciacca says. “They were all proud and accomplished and dignified. They were just perfect."

Speaking with Marsalis after the concert, Ciacca took to heart the trumpeter's advice: “Try to swing as hard as you can and you're going to be good." That mission began when he sought out Grossman, whose lessons laid a solid foundation for the young pianist. After three years, at Grossman's suggestion, he left for the States in 1993 to immerse himself fully in jazz culture, working first in Detroit and then in New York.

Following the admonition to swing above all else, Ciacca gravitated toward the post-bop school even though few players his age drew their primary inspiration from it. “People of my generation are totally into Chick Corea, Herbie Hancock and more modern styles," he says. “Those guys are great, but even if you're a deep harmonic thinker, if you can't swing, you really can't play this music."

The story of jazz, embedded in American soul and having blossomed in the imagination of a young pianist from Italy, is here for all to hear.