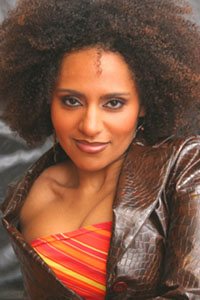 slideshow
Whether one is improvising, composing or even just playing songs, music is a declaration of self. This is never more apparent than with singer and composer Malika Zarra. Born in Morocco and raised in France, Zarra draws upon her roots to inform her jazz by adding elements of North African chaâbi and well as traditional Moroccan styles like Berber, Gnawa, Issawa and Houara. Through it all, her sultry mezzo-soprano bounces between English, French, Berber, Moroccan dialect of Arabic and Arabic.

Now based in New York City, Zarra follows her self-released 2005 debut, 'On the Ebony Road,' with the recently released 'Berber Taxi.' The album once again features her long-running six-piece band, which does an excellent job of putting a new global spin on Herbie Hancock's classic early '70s sound.

Zarra first came to New York in 1996 and stayed three months, meeting many of the friends and musicians that she now works with. It was then, thanks to the encouragement of New School jazz department founder Arnie Lawrence, that she had her creative breakthrough while sitting in with his student band.

“He was the first person who encouraged me to explore more of my Moroccan heritage and to only sing with that ensemble in Arabic and French," she tells Spinner. “I was surprised that an American person would be interested of knowing more about this culture while I grew up learning to hide it. It showed me clearly that it's a big plus for me to have this other background."

Zarra relocated to New York in 2004 and now hides nothing when she plays clubs like the Blue Note, BAM Café and Joe's Pub. At a recent album release party at the Jazz Standard, Zarra captivated the room with her powerful voice and graceful dancing. At one point near the end of the set, things turned into a party as audience members jumped up on stage and Zarra danced her way up and down the aisle in front of the stage. The vibrant performance leaves little doubt that she's found her calling, yet it still wasn't an easy journey for her as a woman and as a musician.

“Because I'm the eldest of five, my mother really counted on me to help out," she says. “Even though music was important in the home, like it is for immigrants from many countries, it is hard to become a professional musician. In the mind of my parents, it wasn't work. It was a troubadour thing."

Zarra persevered and taught herself how to write lyrics, which allowed her to explore her instrument and be confident about it. 'Berber Taxi' is imbued this confidence. Zarra worked long and hard on the new album, “fighting" (to use her word) to get the music just right by tying her varied cultural and musical influences into a cohesive personal statement.

A mix of Moroccan dialect and English can be heard on 'Mosameeha,' which, when combined with 'Prelude to Mosameeha,' is the wonderful centerpiece of the album. Berber can be heard on songs like the softly funky 'Tamazight,' which is a tribute to the strength of Berber women (tamazigh). Arabic can be heard on the love song 'Leela.' Written by Abdel Rad Idris, it is one of two songs here that Zarra didn't have a hand in writing (the other being instrumental 'No Borders,' which was written by her bassist). Imbued with a poppy, guitar-driven West African feel and sung in French, 'Mon Printemps' ("my spring") features the lyrics of noted French actress Irène Jacob.

Morocco's Gnawa rhythms crop up on the song 'Issa's Woman,' while the singer displays her scatting skills on 'Houaria,' the most straight-up jazz tune of the collection (even if it is still tied to the native Houara rhythm, which she comes by on her father's side).

English can be heard on 'Little Voice' and parts of aforementioned 'Modsameeha,' and the former is about listening to the little voice inside your heart. The latter seemingly channels the blues as it speaks of how a lover can forgive but never forget her partner's transgression.

When not leading her band, Zarra can be found at jam sessions and supporting other leaders including John Zorn, Makoto Ozone, Will Calhoun, Lonnie Plaxico and many others. She's versatile enough to sing anything, but she's always enjoyed the freedom that jazz and improvisation provide. Art is about expressing oneself, and Zarra's unique jazz perspective delivers a powerful statement of self, music and of life.

This story appears courtesy of All About Jazz @ Spinner.
Copyright © 2021. All rights reserved.

For interview requests or more information contact All About Jazz @ Spinner.