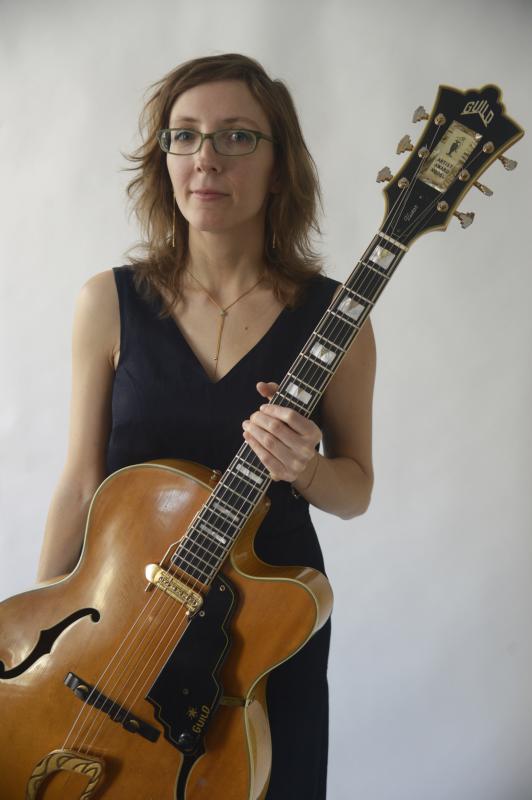 Guitarist and composer Mary Halvorson has been described as “a singular talent” (Lloyd Sachs, JazzTimes), ”NYC’s least-predictable improviser” (Howard Mandel, City Arts), “one of the most exciting and original guitarists in jazz—or otherwise” (Steve Dollar, Wall Street Journal), and “one of today’s most formidable bandleaders” (Francis Davis, Village Voice). In recent DownBeat Critics Polls Halvorson has been celebrated as guitarist, rising star jazz artist, and rising star composer of the year, and in 2019 she was awarded a MacArthur Fellowship.

Halvorson has released a series of critically acclaimed albums on the Firehouse 12 label, from Dragon’s Head (2008), her trio debut featuring bassist John Hébert and drummer Ches Smith, expanding to a quintet with trumpeter Jonathan Finlayson and alto saxophonist Jon Irabagon on Saturn Sings (2010) and Bending Bridges (2012), a septet with tenor saxophonist Ingrid Laubrock and trombonist Jacob Garchik on Illusionary Sea (2014), and finally an octet with pedal steel guitarist Susan Alcorn on Away With You (2016). She also released the solo recording Meltframe (2015), and debuted Code Girl (2018), an ensemble featuring vocalist Amirtha Kidambi (singing Halvorson’s own lyrics), trumpeter Adam O’Farrill, saxophonist and vocalist María Grand, bassist Michael Formanek, and drummer Tomas Fujiwara. Code Girl’s album Artlessly Falling, featuring guest vocalist Robert Wyatt, was voted as one of the best of 2020 in the NPR Music Jazz Critics Poll. Searching for the Disappeared Hour, a duo album with Sylvie Courvoisier, will be out this fall on Pyroclastic Records.

About the NEC Contemporary Improvisation program

NEC’s Contemporary Improvisation program addresses the unique needs of musicians seeking to move beyond traditional boundaries. The department brings together a tremendously diverse group of the world’s finest young artists in a setting where they can grow in a community of composers, performers, and improvisers. With an emphasis on ear training, technique, conceptual ideas, interdisciplinary collaboration, and a wide range of improvisational traditions, the CI program is uniquely positioned to cultivate the complete 21st century global musician. Founded in 1972 by Gunther Schuller and Ran Blake, the department is “a thriving hub of musical exploration.” (Jeremy Goodwin, Boston Globe).

New England Conservatory (NEC) is recognized internationally as a leader among music schools, educating and training musicians of all ages from around the world for over 150 years. With 800 music students representing more than 40 countries in the College, and 2,000 youth and adults who study in the Preparatory and Continuing Education divisions, NEC cultivates a diverse, dynamic community for students, providing them with performance opportunities and high-caliber training with internationally esteemed artist-teachers and scholars. NEC’s alumni, faculty and students touch nearly every aspect of musical life in the region; NEC is a major engine of the vital activity that makes Boston a musical and cultural capital.