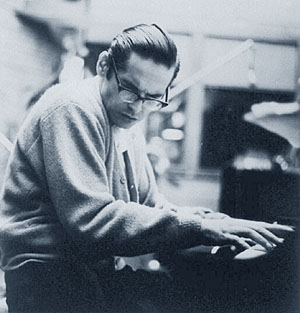 slideshow
On Tuesday, August 16, 2011, the day that would have been the 82nd birthday of legendary jazz icon Bill Evans, Laurie Verchomin, namesake of his famous love song and one of his final and best known compositions, is hosting “The Big Love," a special event in Evans' memory which will include a reading from her debut book and a performance of his music. The event will take place at the Muttart Hall in Edmonton, Canada.

Ms. Verchomin will read from The Big Love: Life & Death with Bill Evans, her recently released memoir of her life and romance with Evans during his final 18 months before his drug-related death in 1980 at the age of 51. Jazz pianist Charlie Austin, a Bill Evans aficionado and the former chair of the Piano Department at Grant MacEwan University will be on hand to play some of Evan's most cherished works. Q&A will follow the reading and performance.

During his lifetime, Evans recorded over 50 albums, received 31 Grammy nominations and won five Grammy awards. In 1994 Evans was posthumously awarded the Lifetime Achievement Award by NARAS. Since his death in September of 1980, more than 50 tribute albums have been recorded as a testament to his legacy.

Ms. Verchomin met Bill Evans for the first time in 1979 at the age of 22 in her home town of Edmonton, Canada at a concert she helped organize with The Railtown Jazz Society. He invited her to stay with him in New York and after a brief courtship via their letter correspondence she did. Evans was an intravenous drug user at the time, seriously ill and both were keenly aware that he was dying.

Doug Ramsey, editor of the “ArtsJournal" jazz blog “Rifftides" describes Ms. Verchomin's new book as “the story of the life-affirming brilliance of [Bill Evans'] music in the final months, a man resigned to the inevitability of his early mortality and the devotion of the young woman he chose to share the end of his life."

The event will be held at the Muttart Hall, home to the Muttart Steinway, a magnificent 9-foot concert grand piano. The hall is located at 10050 MacDonald Drive in Edmonton, Canada. Doors open at 7pm. Show time is at 7:30pm. Advance tickets can be purchased online through Tix on the Square. Group, student & senior discounts are available. For more information call the box office at 780.420.1757.

Laurie Verchomin's debut book, The Big Love, released at the end of 2010, is now available in 21 countries, with the French edition on its way, and sells at Amazon.com, selected bookstores and at author's website. “Her memoir records her own awakening into love, sex, drugs, spiritual enlightenment, death and jazz as well as the incendiary ascension of one of the worlds most beloved musicians," says inspirational humorist and author David Roche. Ms. Verchomin is available for performances, interviews and book signings.

Pianist, composer, author, educator Charlie Austin has appeared with Mel Torme, Henry Mancini, Connie Stevens and the Edmonton Symphony Orchestra. “Charlie is a most accomplished musician, his playing is at once strong and deeply sensitive, he has a beautiful sense of time, and his influences speak to me of Bill Evans and George Shearing, with a little Fats Waller tossed in," writes Cindy McLeod at “Jazz Elements."