Lalo Schifrin to Release "Invocations: Jazz Meets The Symphony No. 7" 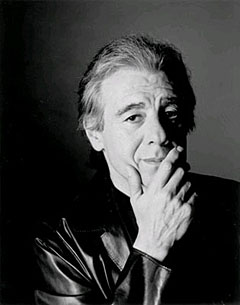 (Los Angeles, CA) Aleph Records will release the latest title in the multiple Grammy©-nominated series, Jazz Meets the Symphony, on April 12, 2011. The seventh recording of the series, Invocations, features original compositions and arrangements by Lalo Schifrin, who earned his fifth Grammy Award this past fall at the Latin Grammy Awards.

Few composers have been able to successfully navigate the diverse worlds of classical music, jazz, and film music. It is Schifrin's ability to switch musical gears which makes him so unique in the music world. His music is a synthesis of traditional and twentieth-century techniques, and his early love for jazz and rhythm are strong attributes of his style.

The taste of an apple is in the contact between the fruit and the palate. Music is the relationship between the contact of the piece with the soul of the listener. The essential thing is the esthetic part, the thrill of the physical impression which is being provoked.

Music imposes its magic through the constant necessity of variations, which can recapture one's past or prefigure one's future.

Jazz Meets the Symphony #7 is an exciting compilation of different works that I have put together in a combination of original compositions and some arrangements, which include classics that I performed with Dizzy Gillespie for three years. The Greek civilization used to invoke the Muses, while we talk about inspiration. The sense of both viewpoints is the same.

From the outset Jazz Meets the Symphony testified to Lalo Schifrin's sparkling vision as well as his genius. The series originally debuted in 1993, combining the London Philharmonic with jazz stars Ray Brown, Grady Tate, Jon Faddis, Paquito D'Rivera, James Morrison, and of course Lalo Schifrin, himself.

“Thinking back, I believe the start of this project was really two of my early film scores," said Schifrin, “namely, The Cincinnati Kid, in which Ray Charles sang backed by a symphony orchestra, and the famous chase scene through the streets of San Francisco in Bullitt wherein I wrote a symphonic score combined with saxophone solos playing at very fast tempos. Then, years later, when I arranged music for Dizzy Gillespie, Ray Brown, Grady Tate and myself to play for a tour with the Israel Philharmonic Orchestra, I began to fully realize that the two distinct musical forms could be combined."

Composer Lalo Schifrin is a true Renaissance man. As a pianist, composer and conductor, he is equally at home conducting a symphony orchestra, performing at an international jazz festival, scoring a film or television show.

As a young man in his native Argentina, Lalo Schifrin received classical training in music, and also studied law. He came from a musical family, and his father, Luis Schifrin, was the concertmaster of the Philharmonic Orchestra of Buenos Aires at the Teatro Colon. Lalo Schifrin continued his formal music education at the Paris Conservatory during the early 1950's. Simultaneously, he became a professional jazz pianist, composer and arranger, playing and recording in Europe.

When Schifrin returned to Buenos Aires in the mid 1950's, he formed his own big concert band. It was during a performance of this band that Dizzy Gillespie heard Schifrin play and asked him to become his pianist and arranger. In 1958, Schifrin moved to the United States and thus began a remarkable career.