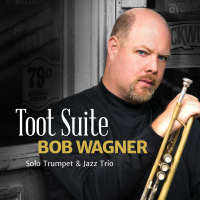 slideshow
Jump City Music is thrilled to announce the release of the debut solo album from trumpeter Bob Wagner. Toot Suite will be available from bwtpt.com in January as well as on all major musical distribution platforms (iTunes, Amazon, etc) shortly thereafter.

In selecting Toot Suite as the music for his debut project, Wagner had to overcome some initial doubts: “Despite being recognizable and enjoyable for the listener, the piece is so difficult for the trumpeter that it’s rarely performed or recorded in its entirety.” He continues, “I was excited for the chance to revive this wonderful music, but also a little nervous to follow in the footsteps of the few trumpeters who’ve dared to tackle this album-length masterwork.”

“Extreme versatility is also required of the jazz trio” offers Wagner. “They must quickly switch gears through a variety of jazz styles and also capture the subtleties of some highly nuanced chamber music.”

In discussing the project, Wagner speaks proudly. “We setup a tour to work out the kinks before taking Toot Suite into the recording studio. It was a ton of work, but I’m really proud of the finished product”.

World class classical and jazz musicians have listened and agree that Wagner deserves applause for his solo debut: “This is some of the best trumpet playing I’ve heard in years.” writes Frank Kaderabek, retired principal trumpet of the Philadelphia Orchestra. Jazz bassist Gerald Veasley adds: “Bob has created a well-crafted debut recording. His bold tone and polished technique shine throughout.”