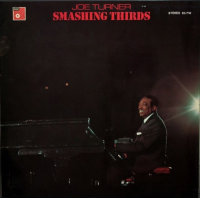 slideshow
Big Joe Turner was a blues shouter from Kansas City, Mo., who stood at 6-foot 2, weighed 300 pounds and was fundamental to the development of rock 'n' roll. He was the first to record Shake, Rattle and Roll in 1954. The other famous musical Joe Turner was a stride pianist who was born in 1907 in Baltimore. Taught to play piano by his mother, Turner took six months of lessons with an undesirable teacher who tended to watch the clock. So Turner turned to his Aunt Katie, who, he said, played “like a man," with a powerful left hand. She taught him to develop his left hand.

Encouraged in the late 1920s to travel to New York, Turner made the three-hour trip from Baltimore and arrived with just $1.25 in his pocket. Making his way to Harlem's Comedy Club, he heard anyone could sit down and play the piano. So he did, running through Harlem Strut and The Carolina Shout. When he finished, James P. Johnson happened to be in the room and came up to the piano. He played the same two songs with a bit more verve.

Turner was good enough that he was offered a job on the spot at the nearby Baron Wilkins Club, where he eventually was discovered by Benny Carter, who hired Turner for his band. Turner's first recording was in 1930 with Louis Armstrong and by the late '30s he was close friends with Art Tatum. During World War II, Turner played in Sy Oliver's Army orchestra, and in the late 1950s he moved to Paris.

While touring in Europe in the late 1960s, Turner was discovered by Germany's MPS Records. In November 1969, Turner recorded for the label in Berlin backed by bassist Hans Rettenbacher (b) and drummer Stu Martin. MPS has just remastered and reissued the album, Smashing Thirds, and it's a joy to hear.

All 13 tracks are laced with a stride-piano sound from another era. What makes Turner special is his ability to play stride while leaving plenty of space for the listener to enter songs. Many other stride players tend to flood the ear with seamless cascades of notes. Rosetta, Willow Weep for Me and Effervescent are particularly lovely.