Joe Sample and Randy Crawford at the Keswick Theatre on May 6, 2007 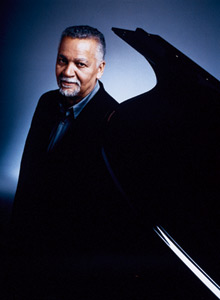 From the first downbeat of “Feeling Good," the title track of the new album, through the last note of the final number, “Mr. Ugly," the listener is drawn into the warm embrace of their long musical heritage. A mixture of soul, jazz, gospel, pop, and of course a little bit of the blues, Crawford's performances underscore her position as one of the premier songstresses in contemporary music. “All Night Long" tears hearts out, and “But Beautiful" couldn't be more so. Sample's piano playing and arrangements envelop Crawford's voice, and capture the essence of each song. Their reinterpretation of Peter Gabriel's “Lovetown," and Albert Hammond and Carol Bayer Sager's “When I Need You" make both songs brand new.

Sample and Crawford first met 30 years ago when she was recording her debut album, Everything Must Change, on which he played. So you could say Feeling Good has been a long time coming. Shortly after that debut album, while writing songs for his band, The Crusaders, Sample invited Crawford to appear as a guest, and wrote “Street Life" especially for her. This international hit record for the Crusaders launched her on her own phenomenally successful career.

Their continued collaboration saw Sample playing on Crawford's own albums and writing many of her biggest hit songs, including “One Day I'll Fly Away," “When Your Life Was Low," and “Last Night At Danceland." The seed for Feeling Good took root when all-star producer Tommy LiPuma (two-time Grammy winner for Album of The Year and recipient of over 30 Grammy nominations and awards) came on board as producer of Crawford's own break through album, Secret Combination.

When Sample asked Crawford if she'd record a new album with him, it was a natural to ask Tommy LiPuma as well, and Al Schmitt (15-time Grammy Award winner as 'Recording Engineer/Mixer'), who had recorded and mixed all the early success with LiPuma and the two performers. The incomparable Steve Gadd on drums, and Christian McBride, today's master of the acoustic bass, round out Sample's trio, adding their own special genius.