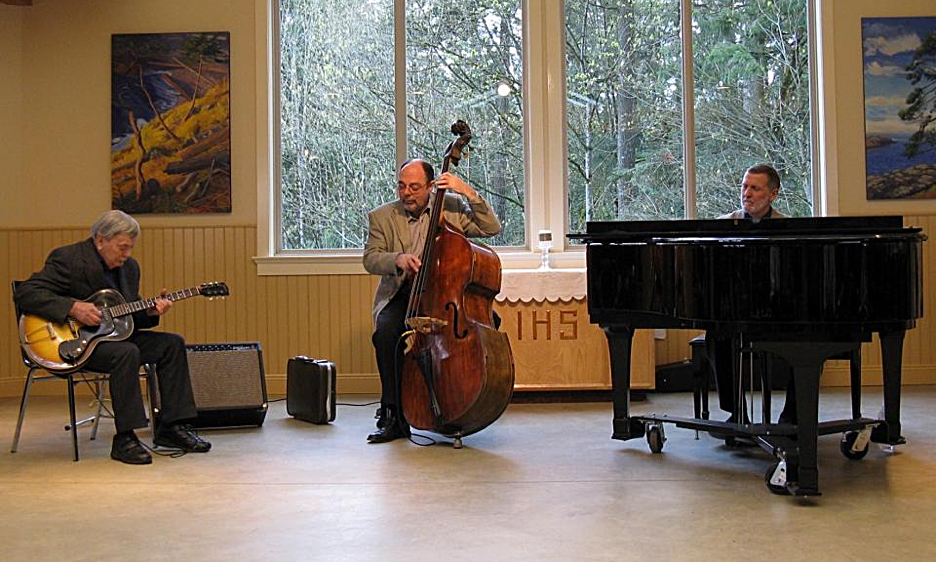 SOURCE: ALL ABOUT JAZZ
November 23, 2021
Sign in to view read count
Born October 3, 1927, Canadian jazz guitarist Jim Kilburn passed away peacefully on Saturday, November 13, 2021, at 10:50 am at the age of 94 at his Qualicum, BC, Vancouver Island home. A cast member of the short documentary film, In the Zone: Rick Kilburn, the jazz guitarist had peaked at 11.2 million internet hits on the movie website IMDB Pro in October 2021.

A husband, father, music mentor, writer of fly-fishing and entomology, master fly-tier, illustrator, cartoonist, electrical technician, founding member of the Totem Fly Fishers, and president of the original Cellar Jazz Club in Vancouver, BC, Jim Kilburn was born in Winnipeg, Manitoba. He grew up in Steveston, BC, with the Italian side of his family. Jim was predeceased by his wife Joyce in 2015 and is survived by his son Rick.

His uncles’ love of music inspired Jim to play guitar. The first to influence him was Charlie Christian, then Tal Farlow and Jim Hall. His guitar teacher was Vancouver guitarist Felix Smalley.

The B.C. music community has always praised the many extensive accomplishments of Jim Kilburn. On hearing the news of Jim’s death, Canadian Polaris music prize juror and former DownBeat magazine jazz music critic, guitarist Kerilie McDowall commented, “Jim Kilburn was a true master. The refined subtlety and nuances within his melodies and guitar phrasing are heard only in guitar players of the highest calibre; the greats such as Ed Bickert, and Wes Montgomery. His approach was so fluid, his improvisation was compositional, structured with a knowing intuition and thoughtful development. He played wonderfully into his senior years and was an inspiration to all who knew him.”

In 1951, Jim landed a job as an electrician at Vancouver City Hall, and he remained there until he retired. To Jim, the job was more than merely a means of supporting his family and two of his other passions—playing Jazz at The Cellar Jazz Club after work and fly fishing on weekends at other opportune times. He enjoyed his work at City Hall, increased his credentials from electrician to electrical technician, rewrote Vancouver City’s electrical code, designed street and traffic light systems for Expo ’86, and came out of retirement to help resolve myriad and challenging electrical problems associated with the construction of the new Cambie Street Bridge. One of Jim’s superiors at City Hall, from the commendations heaped on Jim at his retirement, said, “Everyone should take a page from Jim Kilburn’s example of the work ethic.”

Occasionally, Jim would play guitar at The Cellar jazz club until six in the morning, then head out for some fishing. One anecdote from that period is an amusing story. Jim and Don Cherry had been playing at the Cellar all night and went out to Chilliwack to fish the Vedder River. Jim fished while Cherry played his pocket trumpet. A soldier from the nearby Army camp, meandered by and asked what they were doing. It was explained to him that Jim was fishing and Don Cherry, with his trumpet, was mesmerizing and calling the fish into Jim so that he could catch them. They had a good laugh over that.

Such tales were a dime a dozen at the legendary parties and jazz sessions at 811 Francis Road in Richmond—the first house Jim designed and built. Jim designed the second house, the retirement home, which he and Joyce together built in Qualicum Beach, and from where they hiked The West Coast Trail, climbed to and camped at Dalla Falls, climbed several Strathcona Park mountains, and often ascended their home mountain, Arrowsmith, many times until Joyce’s health began to fail. Jim also played guitar for 14 years at the Tuesday afternoon sessions of the jazz club in The Old School House (T.O.S.H.) Art Center in Qualicum Beach. Ron Hadley had established the T.O.S.H. Jazz Club entirely so that he could play together with Jim, which they did until Jim retired from playing guitar at the age of 87.

During the 1960s Jim wrote articles on fly fishing and its entomology relating to the interior of BC, for Jack Grundle’s magazine Western Fish & Game. He was also a founding member of the Totem Fly Fishing Club, which is the first official Fly Fishing Club to be registered in BC. His son Rick, to this day is the first and only junior member.

Though Jim was an accomplished saltchucker, steelheader, beach-fisher, and lake-fisher, his writing—as demonstrated by the number of articles published in Western Fish & Amp, Wildlife and Western Angling, and Western Fish & Game magazine—shows he was most interested in interior lake rainbow trout and the insects upon which they feed. Those articles have been collected and published as The Complete Angler by COCH-Y-BONDDU Books, and by the B.C. Federation of Fly Fishers.

Jim was, without a doubt, a master fly-tier.

Jim’s son Rick explains that his father Jim was highly gifted at many different talents and skills, “My Dad truly was a genuine renaissance man. He wasn’t just a gifted and brilliant jazz guitarist or fly fisher. He was an accomplished writer, a cartoonist/illustrator artist, a great thinker, a fine husband and mentor. My father had many talents. For example, when he became the electrical technician who rewrote the electrical code book for Vancouver, we were all just so proud of him. He wasn’t just a teacher and creative technician, he was refined, the ultimate gentleman, clever, witty, and humorous. I can’t begin to explain how much our family admired and loved him and appreciated him. He is already greatly missed.”

There will be a celebration of life for Jim at the Kilburn family home in summer 2022. For news and updates, click the website link below.