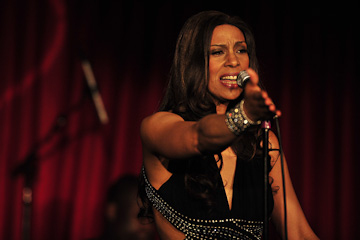 slideshow
Jazz singer Kaylene Peoples and El Cid promoter Michael McCarthy have teamed up to bring jazz to Silver Lake. Once a month Kaylene will have a star-studded themed evening with her talented band and a special guest performer. “The Indie Hotspot Silver Lake Jazz Series” launches June 13, 2012, at 8:00 p.m. Kaylene will be performing Bossa Nova, and her first special guest, Chase Masterson, will delight the El Cid crowd with steamy torch songs from the vintage jazz era. Saxophonist Dave Pell, who mentored with Dizzy Gillespie and produced the Rat Pack, will also play on Chase’s set.

Kaylene Peoples created The Indie Hotspot as a section in AGENDA MAGAZINE back in 2006. She had a desire to reach out to the indie community, which at that time included unsigned musicians, emerging artists, and independent (non-studio financed) filmmakers. Today the term “indie” has evolved somewhat to mean free expression of the highest caliber in music, film, art, and fashion. “Indie” speaks to those artists who aren’t afraid to follow their hearts when it comes to creating.

“When I watched a performance at El Cid back in March 2012, I saw how the independent scene was supported and nurtured there. It literally warmed my heart. I thought this venue would be ideal for a re-birth of jazz. Why not bring it to Silver Lake, a forward thinking community when it comes to art and free expression. El Cid is the perfect spot,” says Kaylene Peoples.

El Cid Bar & Restaurant has been a thriving support for the independent music scene with its true variety night-type venue. For the last 50 years, it has hosted a Flamenco dinner show every Friday through Sunday. El Cid does recurring film screening events, sketch comedy, variety night shows, burlesque, open mic, storytelling, and many different types of live music. Most nights have a theme: singer songwriter, indie rock, alternative, country, hard rock, and some avant-garde cross blends.

“Improvisation and spontaneity play a big role in jazz music. It’s really exciting when the players take the music to a transcendent place and everyone in the room disappears into the moment together. I love that. Also, jazz music came before the big changes that occurred when rock stardom became the desired goal and motivation for young people to pick up an instrument. Jazz music is meant to be enjoyed on a localized level instead of chasing mainstream trends, and I’d like to see it presented on the El Cid stage in its purest form,” asserts Michael McCarthy, El Cid promoter.

Featured musicians for the launch of “The Indie Hotspot Silver Lake Jazz Series” are pianist Kevin Flournoy, who has performed with The Jazz Crusaders, Boney James, and Kirk Whalum; bassist Del Atkins, who is the music director for James Ingram, America’s Got Talent, and American Idol; and Cory Mason, who has performed with Ronnie Laws, John Legend, and Stevie Wonder.

“After working with Kaylene at Catalina, I’m really enthused about singing with her again. Our styles are each unique but complement each other for a great smorgasbord of music. And you can’t beat El Cid for ambiance—such a cool, sexy, intimate feel. If I weren’t in the show on the 13th at El Cid, I’d be in the front row. I might be anyway! Can’t wait to hear Kaylene and Dave, and to jam with Kevin and the band,” states Chase Masterson.

Kaylene Peoples is the founder and editor in chief of the fashion and lifestyle online magazine AGENDA MAGAZINE and The Indie Hotspot. Kaylene Peoples is a vocalist with a 5-octave range, a multi-instrumentalist, award-winner record producer (LA Music Awards), multi-award-winner filmmaker for her feature film REDEMPTION (HUFFY, Goldie Film Awards), and film scorewriter/orchestrator/conductor (AMERICAN PIE 2, SERENDIPITY). Her album ALL JAZZED UP! is the perfect mix of classic vocal jazz and straight-ahead jazz as she performs brilliantly with her quartet. Kaylene’s single off the album, “Do you Remember?” climbed to the top of the independent charts. Due for release this summer is her second jazz album MY MAN. Through her label Boogsey Music, she will be producing Chase Masterson’s new jazz CD for release later this year.

Chase Masterson first became internationally known for her five-year break-out role on “Star Trek: Deep Space Nine,” one of the highest-rated syndicated shows of all time. Fans also recognize her from “General Hospital,” her guest-starring role on the Emmy-winning episode of “ER," and leads in several critically acclaimed films. AOL recently listed Chase as one of their “10 Sexiest Aliens in TV History.” She was also named one of the “50 Sexiest Women of the Year” by FEMME FATALES MAGAZINE. FILM FETISH MAGAZINE listed her as one of the “Hot Leading Ladies” of film for her role in the award-winning feature YESTERDAY WAS A LIE (Entertainment One), in which she plays a mysterious jazz artist and sings four songs. Known to millions of fans worldwide, TV Guide Online Reader’s Poll voted Chase the “#1 Favorite Science Fiction Actress on Television,” and SCI-FI UNIVERSE MAGAZINE honored Chase as one of the “Top 20 People to Watch in Hollywood."

Dave Pell was mentored by Dizzy Gillespie and is credited with having pioneered the West Coast jazz scene. He was the tenor saxophonist for the Rat Pack, produced Sinatra and Count Basie, was president of the West Coast Grammys twice, and was creative director for Motown. Dave Pell has played as a sideman for Shorty Rogers, Pete Rugolo, Benny Goodman, and Gene Krupa. He also produced in the 1950s and 1960s for Tops, Uni, and Liberty. Among his credits in production were singles by Gary Lewis & the Playboys. In the 1970s he assembled the group Prez Conference, a Lester Young tribute ensemble.