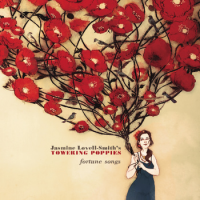 slideshow
The term “Towering Poppies,” which saxophonist Jasmine Lovell-Smith chose to christen her stellar quintet, is an evocative one, conjuring images of radiant flowers reaching heavenward, bold colors against a bright sky. Those images are perfectly appropriate for the stunning sounds of Lovell-Smith’s debut CD, Fortune Songs. But for the New Zealand native, the name has a deeper, more personal meaning.

“In New Zealand we have something called ‘tall poppy syndrome,’” Lovell-Smith explains.“It’s this idea that there’s an intolerance of difference or people who excel. Other poppies in the field try and cut them down to the same height.”

With Fortune Songs, Lovell-Smith asserts her presence as a poppy unafraid to tower, showcasing the same confidence through her vividly individual voice on the soprano saxophone as she displayed in striking out from Wellington, New Zealand to New York City. “In some ways,” she says, “it’s easier to blossom and explore different parts of yourself when you go overseas and start a new life.”

The album’s title refers to Lovell-Smith’s attempt to find her fortune in a foreign country and in the competitive jazz world, but also captures the magical feeling of that life – reprised in the tarot card-inspired title “Seven of Swords.” Something of a fairy tale theme runs throughout the album, from the ethereal, Keats-inspired “Darkling I Listen” to the bright-hued “A Nest To Fly,” penned beside the lake in Prospect Park while thinking of her far-off home.

The confidence that inspired Lovell-Smith to leave home and seek her fortune is reflected in two ruminations on that theme, composed nearly simultaneously on the train from Montreal to New York. “Confidence (One)” explores a calmer, steelier brand of that quality, while “Confidence (Two)” expresses a more hopeful, yearning aspect.

Towering Poppies “formed very organically,” according to Lovell-Smith. She met pianist Cat Toren and bassist Patrick Reid at Canada’s Banff International Workshop in Jazz and Creative Music in 2008, then reconnected when chance drew all three to New York two years later. Hailing from Vancouver, Toren has been an active pianist and bandleader there for the past 10 years, and has performed across North America and Europe, including at the 2010 Winter Olympic Games. Reid, originally from Prince Edward Island, has been an in-demand bandleader and sideman on the Toronto and Montreal jazz scenes.

New Mexico-born trumpeter Big Chief Russell Moore is a graduate of the Manhattan School of Music, and for the last five years has been the house manager at The Jazz Gallery. Originally from Buffalo, drummer Kate Pittman has been playing with a panoply of New York musicians since moving to the city last year. “As each person was added to the group it got closer and closer to what I was hearing,” Lovell-Smith recalls. “Everyone in the band brings a sensitivity and openness to the music which really makes it sing.”

Lovell-Smith’s love for music began in Christchurch, New Zealand, where she grew up surrounded by singing. Her mother, a trained opera vocalist, and her father both sang, so the voice became Lovell-Smith’s first instrument. Her initial introduction to jazz was also through singers, with Sarah Vaughan and Ella Fitzgerald counted as early influences. Echoes of that early exposure can be heard throughout her playing on Fortune Songs, which exudes a love of strong, memorable melodies.

“I was drawn to the saxophone because of the similarity between it and the voice,” Lovell-Smith says, “that connection to breath and the physicality of the sound.” After taking up the saxophone in High School, Lovell-Smith relocated to Wellington to study music. She concentrated at first on the tenor, more recently switching her focus to the soprano, still something of a rarity as a primary axe. “One of the things I like the most about the soprano is that it’s an unfamiliar voice out of the saxophones,” she says. “It’s been less explored, so it feels lighter and freer in that way.”

It’s also lighter in a more literal sense, which was one reason Lovell-Smith chose to concentrate on the soprano when she left Wellington and began traveling. Heading to North America, she spent several months exploring the country before arriving in New York. Initially in town to participate in Ralph Alessi’s School of Improvised Music, she decided to stay in New York City on a more long term basis. The next chapter will see her moving to Connecticut to undertake a Master of Arts in Composition at Wesleyan University, studying under Anthony Braxton, among others.