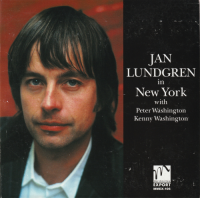 slideshow
On May 31 and June 1, 2005, Swedish jazz pianist Jan Lundgren was in New York to record In New York for Marshmallow Records, an independent Japanese label founded in 1978. Backing Jan were bassist Peter Washington and drummer Kenny Washington. The recording session took place at Nola's Penthouse Studio on 57th St., above the Steinway showroom (both now replaced by a zillion-story tower on what is known in New York as Billionaire's Row). Jim Czak, whom we all miss dearly, co-engineered, mixed and mastered.

Most of the songs were chosen by Jan, with three added by the album's producer and Marshmallow founder Mitsuo Johfu: Autumn in New York, Cherokee and The Gypsy. Jan included two originals—Negotiations and M.Z. The balance were standards Jan wanted to record—East of the Sun, Benny Golson's Stablemates, John Coltrane's Straight Street, I Can't Get Started and Wayne Shorter's This Is for Albert. Great choices all.

The reason I'm telling you about this album now is that after years of being out of print, In New York has just been reissued. It's part of a series of nine trio albums that Jan made for Marshmallow in the 2000s and 2010s. You'll find it on Spotify and at YouTube and on streaming services and for download on retail sites.

Jan doesn't get to New York as often as he used to. The pandemic changed a lot. This album is as close as we'll get unless you're in Stockholm and vicinity. In New York is exceptional. Listen to Jan on Autumn in New York and I Can't Get Started. Sheer elegance. There was gentle quality and swinging sophistication to Jan's playing then as is the case now, only more so. His level of taste is extraordinary, and his feel for American songbook standards is loving and respectful. Listen to Stablemates, one of the most statuesque trio renditions of the song I've ever heard and the most sensual, which is how Benny likes it played. Or listen to Jan's fabulous introduction to The Gypsy.

Straight Street, which Coltrane recorded on Coltrane (Prestige) in 1957, is a knockout, with Jan giving the song the mink-glove treatment. And This Is for Albert, which can be heard on Art Blakey's Caravan (Riverside), twists and turns with grace. Jan's originals here have a distinctly Swedish moodiness and are terrific change-ups from the jazz and pop songbook. As for Peter Washington and Kenny Washington, they are the gold standard and continue to inspire everyone they play with.

This is an album you'll listen to over and over again. And, if I might add, a perfect album to play while on the sofa in front of the fireplace this season. The music will find its way all the way inside and make you very happy.

A special thanks to Guy Jones in Stockholm. And a big hi to Jan and all of my Swedish JazzWax readers. So glad this album and other Marshmallow releases are back in town or on their way.

JazzWax note: Here are the nine albums Jan recorded for Marshmallow, with their original release dates and their reissue dates. They will be available for streaming and downloading: JazzWax clips: Here's Stablemates...

Here's perhaps the most glamorous Cherokee you'll ever hear...