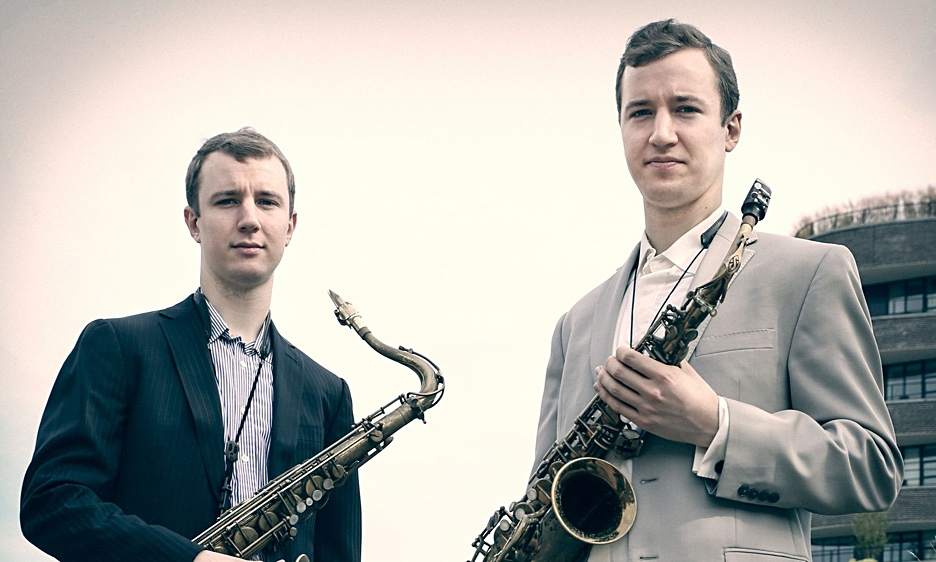 All concerts are at BMCC Tribeca Performing Arts Center at 199 Chambers St., in Manhattan 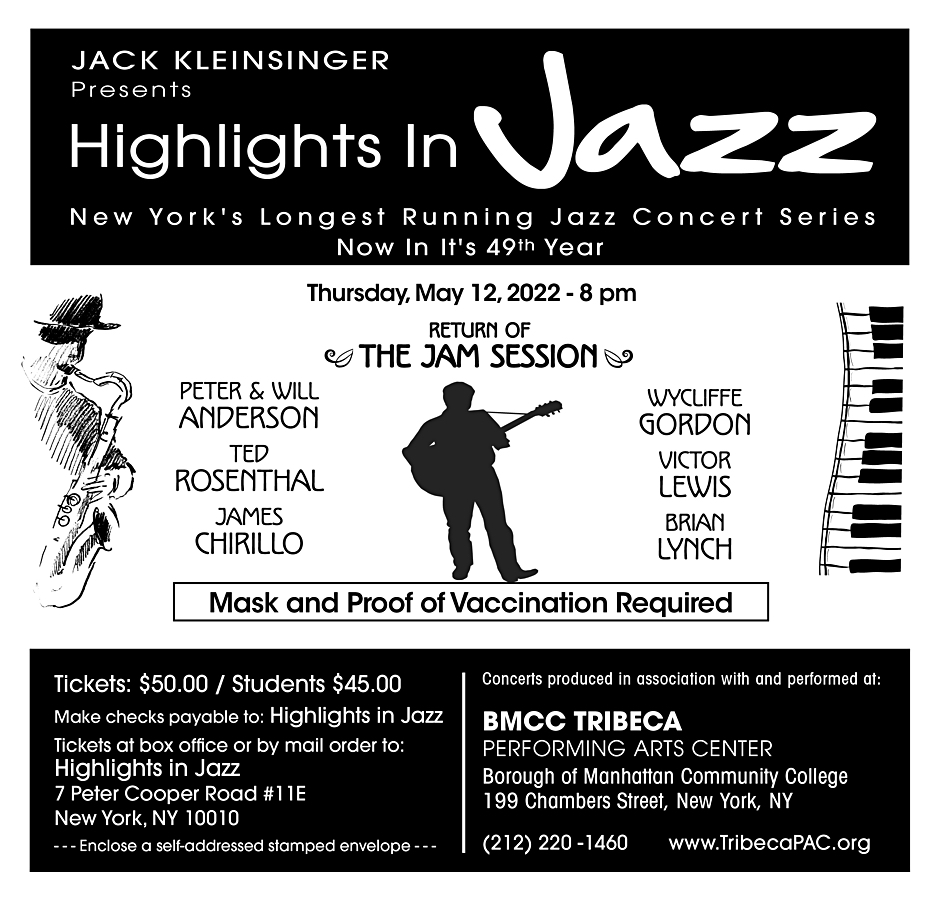 You won’t want to miss the dynamic final Highlights in Jazz concert for 2022, when today’s top jazz players take to the BMCC Tribeca Performing Arts Center stage to celebrate the Return of the Jam Session.

The May 12 event features Peter and Will Anderson on saxophones, flutes and clarinets; trombonist Wycliffe Gordon, pianist Ted Rosenthal, drummer Victor Lewis, trumpeter Brian Lynch and guitarist James Chirillo, playing together for the very first time. To veteran producer Jack Kleinsinger, the jam session is the true heart of jazz, and a jam has become a Highlights in Jazz tradition. For each Return of the Jam Session concert, Kleinsinger brings together musicians who have never before played together in this configuration, showcasing them as they rise to the occasion, showing off their chops and flexibility.

“I never ask anyone to bring their own band,” Kleinsinger notes. “I like to hear what happens when they’re outside their usual setting.”

Trombonist Wycliffe Gordon caught the ears of avid jazz listeners circa 1989 as part of Wynton Marsalis’ Septet; he was an original member of the Jazz at Lincoln Center Orchestra, starting in 1995. Wycliffe has performed with David Sanborn, Rene Marie, Dianne Reeves, Anat Cohen, Arturo Sandoval, Dizzy Gillespie, Lionel Hampton, Tommy Flanagan, Shirley Horn, Joe Henderson, and Eric Reed, to name just a few. The trombonist has released close to three dozen CDs as a leader or co-leader, and is a perennial winner of “best trombonist” honors from numerous publications and professional organizations.

Saxophonists/clarinetists/flautists Peter and Will Anderson: Hailed by The New York Times, The Wall Street Journal and other august publications for their remarkable virtuosity, the identical Anderson twins began steeping themselves in classic jazz while still in elementary school. They absorbed the styles and sounds of Benny Goodman, Sidney Bechet, Louis Armstrong, Nat King Cole, Frank Sinatra, Ella Fitzgerald and Count Basie. They cite Duke Ellington and Charlie Parker as early influences. Since moving to the Big Apple, they’ve played with the likes of Wynton Marsalis, Jimmy Heath, Jimmy Cobb and the Village Vanguard Orchestra. In addition to releasing several albums as leaders, the Juilliard-trained twosome have appeared off-Broadway celebrating the music of Artie Shaw and the Dorsey Brothers.

Pianist Ted Rosenthal first hit the radar of many critics and listeners as the winner of an early Thelonious Monk Institute of Jazz International Piano Competition. Since then, he’s more than lived up to that early promise, releasing over a dozen well-received albums as a leader and accompanying NEA Jazz Masters Art Farmer, Phil Woods, Bob Brookmeyer and James Moody, as well as a host of other jazz greats. The versatile Mr. Rosenthal has received grants and commissions from the NEA, the Alvin Ailey American Dance Theater and the New York City Opera; he earned a four-star DownBeat review for his solo album, The 3 B’s, focusing on tunes by fellow pianists Bill Evans and Bud Powell, plus Beethoven-fueled improvisations. An avid listener as well as player, in pre-pandemic times Ted often could be spotted in the audience of clubs and concert halls throughout the NYC metro area, listening raptly.

For a quick tour of the world of contemporary jazz, take a glance at the discography of drummer Victor Lewis. Since the 1970s he’s been a regular in the studio as a leader and accompanying straight-ahead masters like Stan Getz, Kenny Barron, Dexter Gordon, Lew Tabackin and J.J. Johnson; adventurous souls including Carla Bley, George Adams, David Murray and Charles Tolliver; and vocalists Judy Niemack, Helen Merrill, Carmen Lundy and Abbey Lincoln. This thumbnail sketch leaves unexplored more than a few categories in which Victor has made his mark, but take our word for it that the drummer has been on the scene and consistently sounding great in person and on record for more than four decades.

While many of today’s players hold impressive jazz school degrees, trumpeter Brian Lynch is the rare one who is an honored graduate of a pair of the music’s most legendary and respected proving grounds: Art Blakey’s Jazz Messengers and Horace Silver’s Quintet. Brian played with NEA Jazz Masters Toshiko Akiyoshi, Benny Golson and Phil Woods, and also has deep roots in Latin music, including stints with Eddie Palmieri, Conrad Herwig, Hector LaVoe and Lila Downs. The trumpeter has received numerous awards, grants and commissions, and appeared on hundreds of albums, including two dozen as a leader.

When looking for a guitarist who can swing, look no further than six-string maven James Chirillo. His credits span generations of giants, from those who invented and grew up in the genre (Benny Goodman, Benny Carter, Frank Wess, Eddie Barefield and Buck Clayton) to those who made swing their own in more recent years (Wynton Marsalis, Tony Bennett, Michael Feinstein). James has also worked with Paquito D’Rivera, Joe Lovano and a host of other jazz greats across many styles. He’s played on an abundance of albums, movie soundtracks, and Broadway shows, and is on Juilliard’s jazz faculty.

Presenting a surprise special guest is a series-long tradition for Highlights in Jazz, and the Return of the Jam Session concert will be no exception. The idea was planted in Kleinsinger’s mind long before he tried his hand at putting on concerts. A lifelong jazz enthusiast, the producer recalls the first major concert he attended, one of the earliest productions of the legendary Norman Granz. The surprise special guest that night was none other than Billie Holiday, one of the brightest jazz stars of the era. “She came out on stage and the crowd went wild,” Kleinsinger says. “It made such an impression on me. It was so exciting to see someone extra, people remember it for years. So I decided to do that when I planned my first concert.”

Sometimes the special guest even surprises Kleinsinger, like the time Gene Bertoncini showed up ax in hand. He had been sent in to sub by scheduled guitarist Bucky Pizzarelli who was running late. And sometimes the guests themselves are surprised: Kleinsinger keeps his eye on the crowd to see who he can grab to sit in. He recalls spotting Ellington alumnus Ray Nance in the audience and bringing him to the stage; since Ray wasn’t packing his violin or trumpet, he contributed by singing and dancing.

From his start as a producer in the early 1970s, diversity has been important to Kleinsinger. Not only has every event featured an integrated band, “I’ve consistently aimed for interplay between generations,” he says. “Highlights in Jazz was one of John Pizzarelli’s first gigs—at 15 he was on stage with his dad, Bucky, and Zoot Sims.” Another leap across the generation gap was a pairing of trumpeters: the very young Jon Faddis and senior statesman Doc Cheatham.

The concert wraps up the triumphant 49th season of the venerable series, which returns to the BMCC Tribeca Performing Arts Center stage after a two-year hiatus due to the pandemic. That’s the longest break since the first Highlights in Jazz presentation in the early 1970s. “This season is a beacon of the return to normal,” Kleinsinger declares.

Please Note: For all concerts at Tribeca Performing Arts Center, patrons will be entering through our temporary entrance – the West Street Gate – between Chambers Street and Harrison Street. Go to 190 West St., New York, NY 10013, and walk 50 feet north to the West Street Gate Entrance.

Tickets can be purchased in advance through the online box office or by mail order.

Please send a check made payable to:

Be sure to enclose a self-addressed stamped envelope!