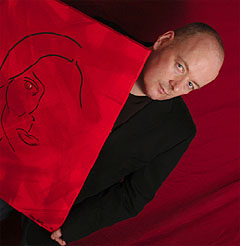 slideshow
Ian Shaw fulfils a life ambition to release an album of originals. “Lifejacket" includes a collection of highly personal stories and observations and is so-called because of all the pressures to stay afloat in life. On it Shaw questions the unsteady passage from young man to middle-aged child.

Produced by Calum Malcolm and worked on together with co-writer David Preston, Shaw explores with humour the themes of drinking, growing older, love and, with poignancy, the heartache of war.

Songs include “Forty-Two", a duet with award-winning singer, Liane Carroll, “Love At First Tequila" - a “Mack The Knife" for modern-day London which features the 2007 BBC Best Instrumentalist, Julian Siegel, on sax, a moving tribute to his father: “A Good and Simple Man" and a stunning reworking of “Rozz Williams" Flowers, featuring cellist, Gabriella Swallow.

Ian Shaw was named Best Jazz Vocalist at the BBC Jazz Awards in 2007 and 2004 and has been cited, along with Mark Murphy and Kurt Elling, as one of the world's finest male jazz vocalists.

Renowned for his interpretations of the Great Songwriters, from Harold Arlen to Fran Landesman, David Bowie to Thom Yorke, his last album saw him records the songs of Joni Mitchell, on his highly acclaimed collection, “Drawn To All Things". One review of this album posed the question; “isn't it time Shaw unlocked his own diary?"

Shaw's soulful, edgy and provocative style has made him a popular name both at home and in the States and he is a regular performer at top Jazz venues and Festivals. He performs regularly with some of the UK's top jazz musicians, including Kenny Wheeler, John Taylor and Cleo Laine, as well as fellow Linn Records artists Barb Jungr and Claire Martin.