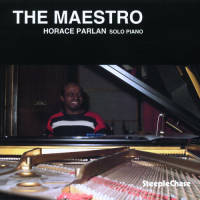 slideshow
For much of his recording career, pianist Horace Parlan functioned as a spirited accompanist. He played with Charles Mingus in the late 1950s and then became a house keyboardist for Blue Note Records, appearing behind Lou Donaldson, Tommy Turrentine, Dexter Gordon, Stanley Turrentine and others. He also recorded with Tubby Hayes, Slide Hampton, Eddie “Lockjaw" Davis and Rahsaan Roland Kirk, to name a few. Along the way, Parlan recorded 31 leadership albums, mostly in trio, quartet and quintet settings. Lesser known are Parlan's four solo albums: Musically Yours (1979), The Maestro (1979), Jazzbuhne Berlin '79/'83 (1983) and Voyage of Rediscovery (1999). These albums were recorded in Copenhagen after Parlan relocated to Denmark in 1972. Today he reportedly lives in a Danish care facility in ill health.

Parlan had a rough life. Born in Pittsburgh in 1931, he was deposited on the doorstop of a local orphanage. When he turned 5, he contracted polio, which left just two fingers of his right hand operable. After his adoptive parents suggested he play piano at age 8, Parlan threw himself into the music. But he didn't feel confident about music as a career so he enrolled at the University of Pittsburgh as a law student.

After 18 months, Parlan decided his true passion was playing jazz piano. As Parlan told Stuart Nicholson in a 2001 JazzTimes interview: “I was not equipped to speak musically in the manner of Tatum or Peterson or any of the pianists I admire. I had to find a groove of my own. I think simplicity is the thing; I learned that from listening to Ahmad [Jamal], who is equipped to do a lot more than he does, but doesn’t choose to.”

In 1952, Parlan began to play at Pittsburgh clubs. But when he went there to jam, many musicians told him to get lost. For whatever reason, Charles Mingus heard something special in Parlan and asked him to join his group in 1957 when he was recording for the Bethlehem, Atlantic and Columbia labels. By the way, that's Parlan's piano on Mingus Ah Um (1959).

As jazz shifted from acoustic to electric in the early 1970s, club and recording work dried up for many musicians over the age of 30. Fed up with the stress of scuffling in New York, Parlan moved to Denmark.

“[Rock] was only part of the reason I left," Parlan told Nicholson. “The other part was social. I could feel a rise of overt racism and the atmosphere changed. There was a lot of crime in the streets, the increase of drugs. I was mugged twice in two years—just robbed on the street by teenagers—and when the same thing happened again on a street in Harlem, it triggered my decision. I decided it was time to leave.”

Parlan had visited in Denmark on a Scandinavian tour with Miriam Makeba (Pata Pata) in 1970. Concerts were booked there, but when Makeba developed throat problems, the performances were scrapped. During his down time in Copenhagen, Parlan nosed around and found a community of American jazz musicians that included Dexter Gordon, Ben Webster, Sahib Shihab and Kenny Drew. Tired of looking over his shoulder in New York, Parlan moved to an environment he called “peaceful" and “and incentive to create."

The two solo albums recorded in November 1979 are testament to Parlan's relaxed comfort level and his enormous piano gifts. Both albums were recorded for the Danish SteepleChase label. Not only are they Parlan's most extraordinary albums but they also are easily among the finest and most poetic solo jazz piano albums ever recorded. Parlan's melodic explorations with his right hand are exceptional. The ear is engrossed when he brings in syncopation and chords, beautifully rendering the music. His five- and six-minute executions on these albums are constantly in flux and never repetitive. Like Horace Silver on ballads, Parlan was a master of drama and knowing how to raise the tension and release it. These albums are must-owns.

Today, it's unclear how Parlan's heath is faring. If any of my Danish, Dutch or Scandinavian friends know, please alert.

JazzWax tracks: Miraculously, Musically Yours is available at Amazon as a digital download, CD and on vinyl here. The same goes for The Maestro here.

JazzWax video: Here's Horace Parlan in action in 2000 playing Horace Parlan. The video also gives you a chance to see how Parlan used the two fingers of his right hand to create the impression that there was no disability at all...