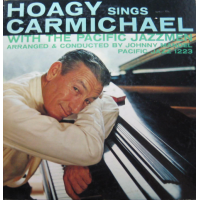 slideshow
Hoagy Sings Carmichael has been called many things. I used to refer to the album as a recording by an aging songwriter singing his own songs in the shower. Others have likened Carmichael's voice to something on a fence you throw shoes at to get it to stop. Or a saloon-song album sung by swinging doors that need oiling. All funny and unfair. Carmichael's voice on the album may sound rusty and off-kilter, but he's still the guy who wrote all the music and, in many cases, the words.

Songs like Georgia on My Mind, Skylark and Baltimore Oriole remain bucolic snapshots of America between the wars, when coveralls, dirt and integrity were part of the landscape, before the place was handed off to advertisers and developers who fabricated the American Dream and suburbia. Carmichael's voice and songbook today is a journey back in time, like the sound of horse hoofs or the squeak of a wooden floor.

Hoagy Sings Carmichael was the brainchild of Dick Bock, who produced the music for his Pacific Jazz Records label. Recorded over three sessions in September 1956, the music was arranged and conducted by Johnny Mandel, who wisely colored Carmichael's vocals with just enough jazz to give it a contemporary feel without disturbing the nostalgia or mood.

On September 13, Don Fagerquist and Ray Linn (tp), Joe Mondragon (b) and Nick Fatool (d) were in and Harry “Sweets" Edison, Conrad Gozzo, Ralph Pena, Irv Cottler and Marvin Ash were out. The songs recorded were Winter Moon, Skylark, Rockin' Chair and Ballad in Blue.

Most exceptional on this album is Art Pepper soloing throughout on alto saxophone. His yearning, aching sound is a perfect match for Carmichael's rye-soaked rocking-chair voice. Jimmy Rowles's piano bleeding through the arrangements also is perfect. Credit is due Johnny Mandel, whose sensitivity and good taste appear on every track. After all these years, the album's music and Hoagy's voice is still what late night sounds like just as you're heading home.

And here's Skylark. Dig Rowles's piano tinkling in the background like a light rain...