SOURCE: SEAN MCKENZIE
May 5, 2015
Sign in to view read count 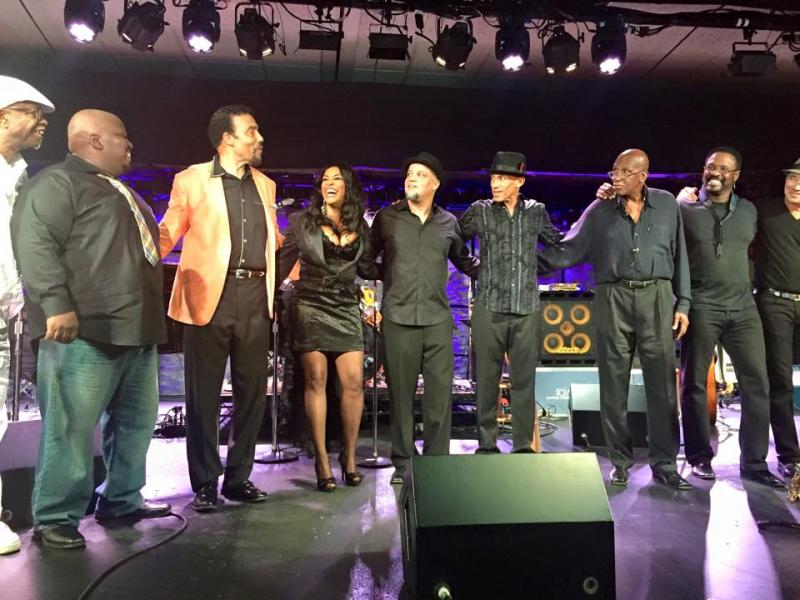 As I watched the amazing lineup of jazz royalty remembering the true legend, Joe Sample, I had never been so moved by such a fitting musical tribute. I remember it was only a little over a year ago that Wayne Henderson had been given his regal sendoff. And now, amongst other Sample fans, I experienced a healing concert for yet another Jazz Crusader. Who was on the lineup? Musical director and pianist Bobby Lyle, who also assembled an incredible group of musicians, including saxophonist Wilton Felder; saxophonist Everette Harp; trumpeter Rick Braun; trombonist Jeff Bradshaw; guitarist Randy Jacobs; drummer Jay Williams; percussionist Doc Gibbs; bassist Nick Sample (Joe’s son); and vocalist Lizz Hogue.

Excitement was the running theme for the evening. Each song performed was beautifully and tastefully executed. It met my highest expectations—something I always appreciated when watching Joe Sample perform. “Viva de Funk,” “Spellbound,” “Joe’s Creole Shack,” “In All My Wildest Dreams,” and “Seven Years of Good Luck” took me way back. Vocalist Lizz Hogue captured the audience with her heartfelt versions of “One Day I’ll Fly Away,” and especially “Street Life!” Hogue also performed “I’m So Glad I’m Standing Here Today,” which was originally sung by the late Joe Cocker in collaboration with the Crusaders and Joe Sample. Aside from the impeccable musicianship showcased that evening, it was a continuous flow of flawless performances, reminding me just how much Joe Sample’s legacy has influenced this genre of music.

Another big highlight was the breathtaking medley of piano solos, which included “Melodies of Love,” “It Happens Everyday,“ and “Ashes to Ashes.” Bobby Lyle held the audience captive with such an endearing reverence for Joe Samples talent as a pianist. It was a very creative display of Lyle’s virtuosity on the piano. But I also felt the respect as he tickled each note of that ivory. By watching Lyle, I could see the friendship he had with Joe Sample. I could feel the profound loss he felt. I was deeply moved by his tribute.

One very appreciative couple who had attended all but one of the 25 Berks festivals stated afterwards that, “This was definitely one of the best shows we’ve ever seen here at Berks. We are both Joe Sample fans, and tonight’s program definitely lived up to his legacy.”—a view apparently shared by many as they stood and applauded the ten performers taking their bows onstage at the show’s end.

The Berks Jazz Festival is known for its excellence in musical performance throughout the years; and “Remembering Joe Sample” on April 18, 2015, in Reading, PA, has lived up to the festival’s high standards. May the memory of Joe Sample’s music live on. I really believe Bobby Lyle and his amazing lineup brought Joe Sample back to life that evening!