The tracks from Gustavo Assis-Brasil's 2016 album Chromatic Dialogues were conceived and recorded in Boston, Los Angeles, and Pittsburgh. 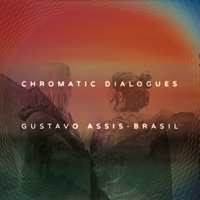 slideshow
Guitar virtuoso Gustavo Assis-Brasil song “Gee,” from his critically acclaimed new album Chromatic Dialogues, has won First Place in the Instrumental category for the 2016 International Songwriting Competition (ISC)! There were over 16,000 entries from 137 countries!

Says Gustavo, “I'm very honored and thrilled to accept this award, and this prize serves as a confirmation that I might be in the right artistic path. I heard the main groove of the song 'Gee' in my head while I was driving home from my teaching studio. I used my phone to record the idea and make sure I could go back to it later. The title has to do with the key of G and the expression 'Gee!!' as in 'Gee! I can't tap my foot while listening to this groove!' ”

The tracks from Gustavo Assis-Brasil's 2016 album Chromatic Dialogues were conceived and recorded in Boston, Los Angeles, and Pittsburgh during the Fall of 2015, and brought to Grammy winner engineer Dave Darlington for mixing and mastering at Bass Hit Studios, New York City, in January 2016.

In 1995 he was featured in Guitar Player Magazine – USA (Spotlight session). In 1999 he got a full scholarship to get his Master Degree In Jazz at Berklee College of Music. From 2001 until 2006, Gustavo played/toured with the renowned group the Dig Trio. Gustavo is the director of the Jazz and Contemporary Music Ensembles and is a faculty member of at the Cambridge School of Weston. His other teaching experience includes: Berklee College of Music (Boston), Musicians Institute (Hollywood), University of Southern California (Los Angeles), Federal University of Rio Grande do Sul, Federal University of Santa Maria, and University of Passo Fundo (Brazil).

In 2005, Gustavo released the book Hybrid Picking for Guitar, a method entirely dedicated to the art of combining pick and fingers. In 2008, he released the follow up book Hybrid Picking Exercises: Single Note Permutations, with more than 1,400 different exercises based entirely on math permutations. Also in 2008, Gustavo released a live DVD/CD combo called In Concert. On that same year, he was invited by ESC Records (Germany) to write and record an arrangement of Steely Dan's “Aja,” for which was to be included in a tribute CD called Maestros of Cool.

In 2009, Gustavo was invited to participate in the project “Mahavishnu Re-Defined—a Tribute to John Mclaughlin & the Mahavishnu Orchestra”. In 2010 he released the soundtrack for the Brazilian movie “Manhã Transfigurada”. In 2011, Gustavo released his third book, “Hybrid Picking Lines and Licks”. Guthrie Govan wrote the foreword for it. His critically acclaimed 2016 album release Chromatic Dialogues has garnered rave reviews worldwide!

Here's what the press has said about Gustavo's Chromatic Dialogues (Grammy 2016 ballot):

“A masterclass and a masterpiece!”—LET IT ROCK, Canada

In other news, Gustavo recently released a masterclass video series that he's very happy with the final product. Also Gustavo is currently working on a new solo album.