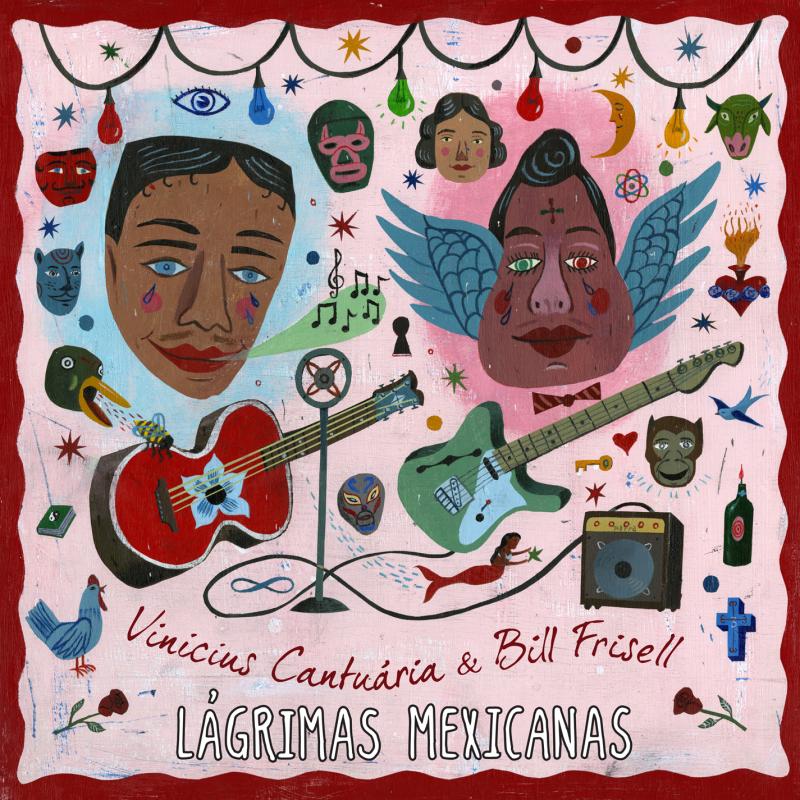 slideshow
Undoubtedly, Bill Frisell and Vinicius Cantuária's new album, Lagrimas Mexicanas, epitomizes a union of extraordinary musicians. Frisell's and Cantuária's own music have clearly distinctive origins, but with complimentary styles. Through the blending of emotive rhythms and harmonies, and the melding of classic and experimental sounds, the two artists have found an easy home with one another. Lagrimas Mexicanas is scheduled for release on January 25, 2011 via Entertainment One Music.

As a guitarist, composer, and bandleader, Bill Frisell has established himself as a visionary presence in American music, best known for his innovative and improvisational guitar playing. Brazilian singer-songwriter, guitarist and percussionist, Vinicius Cantuaria flawlessly merges the classic sounds of bossa nova with contemporary music, creating distinctive compositions and arrangements. Having played together in a variety of settings over the past 25 years, including on one another's albums, Frisell and Cantuária had been looking for the right opportunity for a full-on collaboration. Lagrimas Mexicanas presented itself as the perfect occasion.

When Cantuária moved to New York from his homeland of Brazil, he was struck by the amalgamation of sounds emanating from the streets of New York City. In particular, the diversity of Spanish-speaking people affected him. Cubans, Puerto Ricans, Colombians, Venezuelans, Mexicans and countless others formed a rich multi-cultural collage. As these sounds filled Vinicius' head and heart, he returned to his Brooklyn apartment and started writing Lagrimas Mexicanas, heavily influenced by the melting pot of New York City.

Similar to the bossa nova movement in the '50s and '60s, on Lagrimas Mexicanas Frisell and Cantuária collaborated to fuse traditional Latin rhythms with improvisational jazz methods. Bill understood Vinicius' vision for the album, and their musical spontaneity inspired Bill's orchestration. While Cantuária wrote the lyrics in a mix of Portuguese, Spanish and English, both musicians easily fell into the rhythm of writing the arrangements together. Although their styles differ, Frisell and Cantuária create charged and breathtaking music, as in “Calle 7," inspired by Vinicius' stroll down 7th Avenue in Brooklyn's Park Slope.

At the heart of the album, Frisell and Cantuária demonstrate their expertise: Frisell experimentally plays with the arrangements and Cantuária weaves poetic lyrics with moving rhythms. Together these two great guitarists generate a sublime, beautiful, and accessible world of music. From the opening notes of the first track, “Mi Declaracion" to the final song “Forinfas," Frisell's intricate guitar playing effortlessly couples with Cantuária's dreamy vocals and his stirring declarations of love to form a united vision.

Bill Frisell and Vinicius Cantuária view Lagrimas Mexicanas as a singular movement, all emanating from one simple, but powerful place: Love. Together, they communicate a passionate sense of optimism, opportunity and hope.

* More to be announced soon.