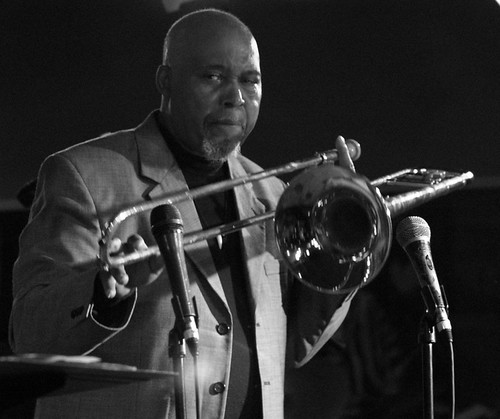 slideshow
Riverbank State Park in association with Brownstone Entertainment Complex, LLC, are pleased to present, for our fourth year: “Jammin' on the Hudson"; “The Concert series For The Serious Jazz Lover".

On Sunday July 24, 2008, we are proud to present one of the founders, of the so-called 'avant-garde' period, and a genuine 'Icon' in Jazz. His father was the bassist with The Savoy Sultans, and he has been keeping the tradition alive in his own right. A great trombonist whos' talents truly deserve far greater recognition, for what his skills and talents bring to light. The recordings he made for the “Blue Note" label in the early 'Sixties set the standard to be followed; his records, which he made with Jackie McLean, Herbie Hancock, Bobby Hutcherson, and Tony Williams set the cutting edge of what became the New Thing on the New York Jazz Scene, at that time and still to this day. He was also an Original Cast Member of the James Baldwin Play “Blues for Mr. Charlie" on Broadway. Although this very special person had been 'underground' so to speak for a number of years, in 2007 his latest recording was released on the Lunar Module record label entitled “Inner Cry Blues". This record further affirms the significance of his worth as a Composer, Arranger and Band Leader. “Jammin' on the Hudson" is happy to welcome aboard this one of a kind talent; the 'inimitable' Mr. Grachan Moncur III.

The entrance to Riverbank State Park is located at 679 Riverside Drive, at 145th St.
Concerts are outdoors, on The “Mainstage" overlooking The Hudson River, and are Free!

Even if it rains, the Concerts will still be held-- indoors in an Auditorium.