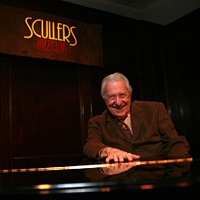 “I've known Freddy Taylor for 65 years," said Wein. “I had my Storyville club in Boston from 1950 to 1960, and when Storyville closed, Freddy, who was an avid lover of jazz, decided to open his own club called Paul's Mall and take over the Jazz Workshop. In doing so he kept jazz alive in Boston, from then up until this day. I'm happy to present him with the George Wein Impresario Award, which he so merits."

A native of Newton, Massachusetts, Taylor's career as one of Boston's premier jazz promoters dates back to 1963 when he ran Paul's Mall and the Boston Jazz Workshop. He later began producing concerts at Symphony Hall and the Boston Garden, working with Bob Dylan, Miles Davis, and others. In 1991, he started working at Scullers, and from 2001 to 2007, he served as artistic director of the Tanglewood Jazz Festival.