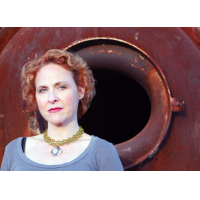 Los Angeles, CA: It is a busy season for Julie Christensen, whose critically-acclaimed recordings, and longtime backing vocals for Leonard Cohen, confirm her standing as a quintessential “Americana” artist who matters. Now, her body of work has taken a decidedly soulful turn, on WEEDS LIKE US, her current recording, with an official release date of November 20, on Household Ink (the eclectic, Santa Barbara-based independent record label). Through The Connextion's digital distribution, WEEDS LIKE US, a rootsy collection of what her label describes as “great plains soul,” is available on iTunes, Amazon Mp3, Spotify, Emusic, and also at Julie's web site.

The album experienced a “soft release” earlier this year, but Julie has added a final, bonus track, making WEEDS LIKE US complete: “Another One” is the stirring ballad Julie wrote with life-changing events in mind, including the death of the fifth of eight members of her first country-rock band, the midwestern “Longshot.” Julie reports, “A sixth member of the band just got sentenced to life in prison. All of these deaths and incarcerations had a lot to do with alcoholism and drug addiction. It took me awhile, but I escaped all that after I broke away from Divine Horsemen (in the late eighties), and I probably wouldn’t be here if I hadn’t. There’s a seventh member of Longshot, a Vietnam vet with PTSD. I have no idea of his whereabouts. I hope he’s ok. Survival is what WEEDS LIKE US is all about.” The addition of the poignant “Another One” (“We lost another one, And it's always on a bright, blue day I get the news...”) is definitely a testament to survival and grit. It’s a song that her friend and original collaborator on the album, Kenny Edwards, played live with Julie several times, perhaps even after he was aware of his health issues. True to the impeccable renderings we've come to expect from Julie, this stunning performance (with intimate acoustics) highlights what music critic Greg Burk once called her “perfect taste.” Burk added (in LA WEEKLY) that Julie is “one of the truer singers you'll ever hear – straight up, no mannerisms: recognize how she could sing with both Leonard Cohen and Chris D.”

In 2008, Julie had teamed up musically with Edwards, and they talked about a recording that would become WEEDS LIKE US. A seminal musician and producer, Kenny was the Stone Poneys' co-founder, who later continued working with Linda Ronstadt, and so many others. Julie and Kenny had shared the stage many times, including at 2009’s Folk Alliance Conference in Memphis, where Christensen had an official showcase. “It was the perfect affirmation; the perfect team,” she says. “We got through some of the CD's pre- production, and had a wonderful time with the live arrangements.” But, their work was cut short. The following summer ended sadly for all who loved Kenny, when he passed away, after battling cancer. “I was so proud to work with Kenny, and I know he's still here,” Julie says. “I often feel as though I’m communicating with him, when I'm out on a good walk. After we'd mastered WEEDS LIKE US with my new producer Jeff Turmes, I put the CD in special packaging, and sent it to friends and journalists. Their incredible response lifted me into a cathartic celebration of this journey.”

This Fall also brings heightened accolades for Julie, as the music community all-but- inhales the hugely anticipated biography of Leonard Cohen. Sylvie Simmons' book, “I'm Your Man – The Life of Leonard Cohen,” deftly brings to life the joy and drama traversed by Julie (and a host of treasured band members), when traveling the world with Cohen, beginning as an endurance experiment she firmly encouraged, and culminating with the musical events - starring Julie and some phenomenal friends - that led to Cohen's unexpected return to the world stage. During a southern California stop on Simmons' book tour, Julie shared the bill with Sylvie, in a cozy, house concert. No doubt, she will continue “communing” with this family of musicians and devotees, as exposure of the Cohen story expands through the holidays.

Julie regularly commutes between southern California, Austin, Nashville and New York, performing on bills with other Americana artists of note. For this September's annual Americana Music Association Conference, Julie and friends (Amelia White, Tommy Womack) kicked things off, in a “Pre AMA Week Concert,” hosted by THE ALTERNATE ROOT (an Americana bible). In the magazine's recent issue, editor Danny McCloskey reports, “Julie Christensen has roots that give her music an Americana foundation, with personal tentacles that dig deep into the heartland... Weeds Like Us... crackles and burns under the glow of Julie’s vocals...”

Journalist Joe Woodard says, “WEEDS LIKE US is a hard-won and triumphant project, grown from lost seeds. After a period of recovery from Edwards' passing in 2010, Christensen regrouped in mid-2011 with producer-songwriter-multi-instrumentalist Jeff Turmes (a five-year veteran of Mavis Staples’ band), whose haunting, gothic-folk, title song, 'Weeds Like Us,' is one of the anchoring pieces of the song set. She pays tribute to Edwards with his tender song, 'On Your Way to Heaven,' which is graced with a harmony vocal by Teddy Thompson. Enhanced by musical input from longtime Christensen allies Greg Leisz, Turmes, Don Heffington, and Debra Dobkin, WEEDS LIKE US is a musical journey with heart and chops, from the rollicking opener, 'Restless,' to the benediction of 'Broken.' From the down ‘n’ dirty business of Jim Lauderdale's 'Slow Motion Trouble' to the rugged country- rock waltz of her own 'My Lucky Stars,' the record showcases what makes Christensen so versatile and authentic. WEEDS LIKE US announces a strong new phase in the ongoing saga of Julie Christensen, Americana artist to the marrow.”

In his BENTLEY'S BANDSTAND Column of THE MORTON REPORT, Bill Bentley reveals something about the soul of this project: “There are certain singers who just won't behave. They skip around genres like free spirits... it's almost always for the good of the music... Julie Christensen is the poster girl for that crowd... Check her resume: Leonard Cohen, Divine Horsemen, Iggy Pop, Robben Ford, PiL, Van Dyke Parks, Lou Reed (and her) solo albums... The journey continues on Weeds Like Us to stunning effect... Christensen's voice (is)… a pure instrument of power and finesse. Calling her style now Great Plains soul, Weeds Like Us is a survivor's tale of determination and beauty... There is searing resolve in these songs..."

Julie has always possessed a lead-singer's authority, songwriter's clarity, and authentic, Americana roots. She is also widely known for world-class interpretations of masterpiece works, in a journey that lands her as an historic muse: Julie's first gig with Leonard Cohen was as a backing singer, with Perla Batalla, for the 1988 world tour (fifty-nine dates in three months). As Sylvie Simmons reports, in her blockbuster, “I'm Your Man – The Life of Leonard Cohen:” “They were quite a pair – Julie a striking, statuesque blonde who, for half of the eighties, had sung with her then husband Chris D. in an edgy L.A. punk-roots band called the Divine Horsemen, and Perla a petite, sparkling brunette of South American ancestry, with her own band and a background in jazz and rock. Both were stylish and mischievous, and accomplished singers who had sung together in the past.” Indeed, 1988 marked the first of two occasions in which Julie was a voice of uplifting optimism, encouraging Leonard to tour. Simmons: “Over lunch, Leonard told her, 'This is going to be a very difficult tour; we'll be playing four or five nights a week in different cities.' Christensen laughed and told him, 'Leonard, I had just got done doing CBGB's and the Mab and these places where I had to pee by the side of the road and change in awful restrooms.' I was like, 'Come on, let's roll up our sleeves and go.'”

The second, momentous occasion - when the work of Julie, and Cohen bandmates, would manifest as an abiding influence that transformed the latter years of Cohen's career – began with the 1993 recording of THE FUTURE album. Julie and Perla performed the backing vocals to perfection, and both joined the subsequent tour, which seemed like it might be the last for Cohen, who famously turned to an exclusive life-focus on Buddhism. Preparation for that tour had included a one-time-only “Columbia Records Radio Hour Presents: Leonard Cohen Live!” Exposure for the maestro and his eight-piece troupe, clearly, was taking on a life of its own. With backing of the Canadian government, impresario Hal Willner was drawn to this momentum. Thus was born “Came So Far For Beauty,” the live tribute to Cohen that bowed in New York’s Prospect Park in 2003, as preparation for overseas productions - first in England, at the Brighton Festival (2004), a year later at the Sydney Festival, Australia, and a final performance (2006) at the Dublin Theatre Festival - an unparalleled musical feat of its kind. The two, immaculate Sydney Opera House shows - which were filmed by director Lian Lunson - were cut with interviews, including Cohen's own commentary, to produce the now-landmark documentary, “Leonard Cohen: I'm Your Man.” Julie and Perla's “Anthem” duet was nothing short of stunning - among the other stellar performances from dozens of artists ranging from U2 to Antony to Rufus Wainwright.

The documentary's soundtrack (which includes recordings by Willner during the 2004 Brighton performance) was roundly applauded, with praise for Julie's notable performances: Music critic Thom Jurek, in ALL MUSIC GUIDE, proclaimed, “As a soundtrack for Lian Lunson's film... Willner's choices from the two overseas evenings... are exceptionally well done... It helps when you've got great material, an arranger like Steven Bernstein... And when you have Julie Christensen and Perla Batalla – longtime Cohen bandmembers – singing backing vocals on most every tune, and taking their own leads as well, the performances move to another level and you have a feast...

Amidst the glittering fanfare - and undeniable, exponential growth of the exuberant, tribute showcases - Leonard emerged from monastic seclusion. Cohen's career has experienced a phenomenal game-change ever since (an accomplishment for which Julie and the Cohen-troubadours can surely pat their shoulders).

Again, Thom Jurek: “Christensen doesn't play with... songs. She works them, and in the process stretches herself.... an encounter with popular song unlike any other, which is as high a compliment as can be paid to this gifted vocalist.” Julie is available to talk, and to perform. We hope you'll visit her website and enjoy WEEDS LIKE US.