The world premiere was dedicated to Larry Coryell, the 'godfather of fusion,' who passed away in New York in February. 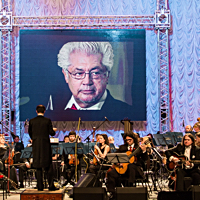 slideshow
The 20th international World Of Guitar music festival took place on May 22-26, 2017 in Kaluga, Russia. This year, at the festival’s opening, Larry Coryell’s last opera, based on Leo Tolstoy's novel Anna Karenina was presented. The world premiere was dedicated to Larry Coryell, the “godfather of fusion," who passed away in New York in February. Mr. Coryell worked on the opera until his final days and it was completed posthumously by his friends and collaborators Roman Miroshnichenko and Nenad Stephanovich.

“Over the past few years, Larry Coryell has been completely focused on the opera," says resident and festival's director of international projects Roman Miroshnichenko. “I had the privilege of assisting Larry on this special project. We repeatedly discussed operatic concepts, complicated guitar skills and other essential aspects of the music. A week prior to his death, Larry sent me the score of the final part of the opera. In a recent conversation, Larry's wife Tracey Coryell said that he 'lived' this opera and asked not to cancel the premiere."

It was a brilliant production by Larry Coryell featuring Moscow's Russian Philharmonic Orchestra along with Russia's most prominent guitarist, Roman Miroshnichenko, Serbian classical guitarist Nenad Stephanovich, and Slovenian opera soloists. All were well received at a sold out Kaluga Philharmonic Hall.