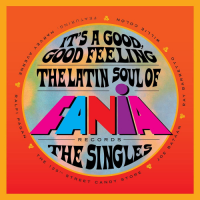 Back in the 1960s, there were the Billboard pop and R&B charts. Everything was rock and soul, Black and white, uptown and downtown. But if you lived in New York, as I did then, in Washington Heights, you knew there was a third stream—boogaloo. You could hear it coming out of the open windows of apartments on summer weekends in Washington Heights, from 140th to 175th streets, and in East Harlem. Amazing what you'd hear in the days before air conditioning, when the thump of large rectangular fans keep people in apartments cool.

The boogaloo was distinctly Latin music but in truth it was a funky amalgamation of Latin, soul and jazz. There were mambo and son montuno rhythms, jazzy horn-riff arrangements and soul-inspired vocals, often sung in English. As a kid riding in the back of my parents navy blue Rambler on our way back uptown from dinner in Chinatown or returning over the George Washington Bridge from a night at Palisades Amusement Park in New Jersey, the music grinding outside was high-energy, hypnotic and alluring.

Now, Craft Latino has released It’s a Good, Good Feeling: The Latin Soul of Fania Records (The Singles), a spectacularly edited box set of boogaloo and Latin-soul singles featuring 89 tracks of bliss. Just listening to this box takes me back to those sweltering twilights, when neon lights came in Spanish neighborhoods between evening and nighttime. The vibrant colors shimmered in the humid air and you could smell onions, garlic and sofrito being sizzled down in pans before the chicken, rice and olives went in.

The four-CD set with a bonus 7-inch single packaged in a 60-page hardcover book spans from 1965 to 1975. It features dynamic tracks by leading boogaloo artists such as Joe Bataan, Ray Barretto, Bobby Valentín, Ralfi Pagan, Mongo Santamaria and Larry Harlow. There's also an abridged 28-track double-vinyl version. All of these tracks come with a big beat and were designed for creative freestyle dancing.

Among the highlights are Bataan's Gypsy Woman and When We Get Married, Harlow's That Groovy Shingaling, Barretto's A Deeper Shade of Soul and New York Soul, Mongo Santamaria's Hey Sister, Ralfi Pagan's Make It With You, Butter Scotch's Try Just a Little Harder, and W.R.L.C.'s Johnny's No Good. There are even two Jumpin' With Symphony Sid radio air checks by Bataan and Valentin, in tribute to “Symphony" Sid Torin, who during these years was instrumental in promoting Latin music on WEVD-FM in New York.

All 89 tracks are chunky, red-hot swingers, and the set's sound is fantastic. Now I'm hungry for arroz con camarones and a malta followed by flan. A shame this music didn't receive more mainstream airplay and coverage by media through the years. It's a joy to know that the music is still killer today and will appeal to anyone who's passionate about love, life and art.

And here's Mercie by Ralph Robles...