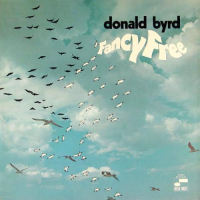 slideshow
Mention the 1970s to jazz fans and many will think of the jazz-rock fusion movement. Bands then that united jazz and the rock guitar and other electric instruments included Tony Williams Lifetime, Chick Corea ad Return to Forever, Miles Davis, Weather Report, Larry Coryell's Eleventh House and the Mahavishnu Orchestra to name just a few.

But fusion wasn't the only jazz-hybrid movement emerging in the post-Woodstock '70s. Another jazz genre took its cues from the Stax label under the direction of Al Bell, Sly Stone, James Brown, Kool and the Gang, the Ohio Player and other electric funk artists popular in African-American communities and on black radio. One of several jazz artists who pioneered this soulful electric jazz-funk fusion was Donald Byrd.

Last time I posted on Byrd, I looked at his album Fuego (1959), a hard-bop masterpiece. During the early and mid-1960s, Byrd's albums for Blue Note moved in the same general direction as many other artists who succeeded by combining R&B, funk and the riff-heavy boogaloo. These artists included Horace Silver, Lee Morgan, Grant Green, Herbie Hancock, the Jazz Crusaders and many others.

But by 1969, Byrd shifted gears again by integrating electronic instruments and adding a strong drum beat, which not only helped him transition to a younger African-American audience but also put him in play at parties and club dance floors. Unlike rock fusion, which was popular with sit-down audiences in college dorm rooms and events, Byrd focused more on the grooves and beats, accompanying them on his trumpet rather than being driven by them.

This period in Byrd's career began in 1969 with the recording of Fancy Free, an album decades ahead of its time. It sounds fresh today, and young artists still sample it. There were only four tracks—Byrd's Fancy Free and I Love the Girl, Mitch Farber's The Uptowner and Charles Hendricks' Weasil.

Fancy Free is an upbeat but mellow Latin-jazz track showcasing the conga and Dodgion's beautiful flute. I Love the Girl is a precious ballad dominated by Pearson on the Fender Rhodes electric piano and Byrd. The Uptowner is a gorgeous funky boogaloo with Byrd, Foster and Priester. Weasil grooves at roughly the same tempo with the same instrumental line up and a flat snare by Joe Chambers that foreshadows the drum sample. Byrd's horn stands out on all of the tunes, ruminating on the slower songs and heating up on the up-tempo groovers.

Interestingly, a third session was recorded for this album, featuring Byrd (tp), Kenny Rupp (fhr), Al Gibbons (fl), Gary Campbell (ts), Duke Pearson (el-p), Wally Richardson (g), Bob Cranshaw (el-b), Freddie Waits (d), Roland Wilson (cga), and three vocalists. Three songs were recorded—Now Steady (with the horns out), Yano and Congo (an instrumental). All three were rejected for some reason. I suspect the four songs they already had in the can were allowed to run in full rather than be cut down to make room for two others that were out of character with what they had. Thankfully.

Between Fancy Free in 1969 and Words, Sounds, Colors and Shapes in 1983, Byrd's albums grew increasingly fascinating in the electronic jazz-funk space. During this period, Byrd probably hit his commercial peak with Places and Spaces in 1975, which hit #1 on Billboard's jazz alum chart, #6 on the R&B chart and #49 on the pop chart. As a producer, his biggest success was The Blackbyrds' Walking in Rhythm in 1974, which was featured on the group's Flying Start.

Yesterday, I had great fun crossing the jazz-funk cosmos listening to all of Byrd's jazz-funk albums on this list: All of them are superb, with different grooves and feels.

And here's I Love the Girl, with Duke Pearson and Donald Byrd...