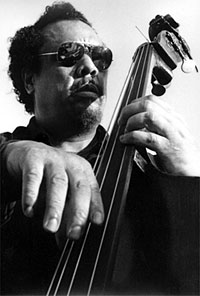 slideshow
By 1966, touring slowed considerably for bassist and leader Charles Mingus. He hadn't recorded a studio album since 1963 (Mingus, Mingus, Mingus, Mingus, Mingus for Impulse), and live dates had begun to dry up in 1965. Unable to pay the rent on his Bowery loft in 1966, he was evicted along with his furnishings, music and bass and arrested. The loft Mingus and Caroline, his five-year-old daughter, occupied was supposed to be a music school he had planned to start but never did.

During this period, Thomas Reichman filmed a documentary of Mingus expounding on a range of socio-political topics of the day and captured Mingus being evicted and arrested. We see what happens when a well-known jazz artist tries to make sense of his time and how he loses his currency in shifting times. In the years that followed, Mingus would tour relentlessly to earn a living but wouldn't record in the studio again until 1971 (Let My Children Hear Music for Columbia).

Reichman's documentary, Charles Mingus 1968, was released in May of that year. It recently went up at YouTube. Reichman died at age 30 in 1975 of a self-inflicted gunshot wound. Here is the documentary, with cameos by Sue Mingus (above), drummer Dannie Richmond, saxophonist Charles McPherson, and pianist Walter Bishop Jr....