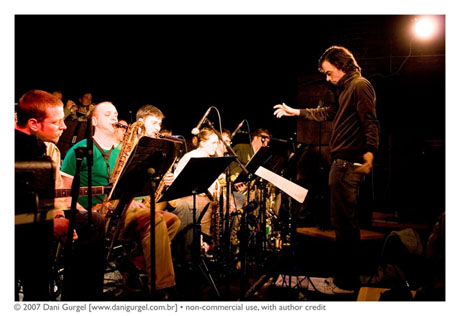 These upcoming high-profile Canadian jazz festival concerts are the latest in a string of recent career highlights for both band and leader. Argue and his band have been credited with “a wholly original take on big band's past, present and future" (Seth Colter Walls, Newsweek). They have been profiled in The Canadian Press, have performed at such world renowned venues as The Kennedy Center and Merkin Concert Hall, New York; collaborated with critically acclaimed pianist/composer Vijay Iyer among others, and earned a GRAMMY® nomination for Infernal Machines (New Amsterdam Records).

All four Canadian jazz festival concerts are supported by the Canada Council for the Arts, which enables Canadian audiences to discover artists from other regions and provinces, and Mid Atlantic Arts Foundation through US Artists International (USAI) in partnership with the National Endowment for the Arts (NEA) and the Andrew W. Mellon Foundation.

“Infernal Machines stands defiant, updating the big band tradition for the new millennium while presenting exciting possibilities for the future." —Troy Collins, All About Jazz

“An exciting stylist with an abundance of ideas, Argue deserves his place alongside Schneider, Hollenbeck and other contemporary big band arrangers who are looking beyond traditional notions of what a large jazz orchestra should, and can, sound like." —James Hale, Jazz Chronicles

“Clearly some of the most ambitious and compelling sounds I've ever encountered in the past 40 years." —Juan Rodriguez, Montreal Gazette

* * * “Combines the rhythmic insistence of late Gil Evans with the coloristic approach of Maria Schneider and Bob Brookmeyer." —J.D. Considine, Globe and Mail

“Infernal Machines, however, lives up to the buzz, featuring writing and performing that catapults Argue's group into the ranks of jazz's best contemporary large ensembles... masterfully blends thrilling, innovative rock elements with sounds that remind one that he's running a big band after all." —Peter Hum, Ottawa Citizen