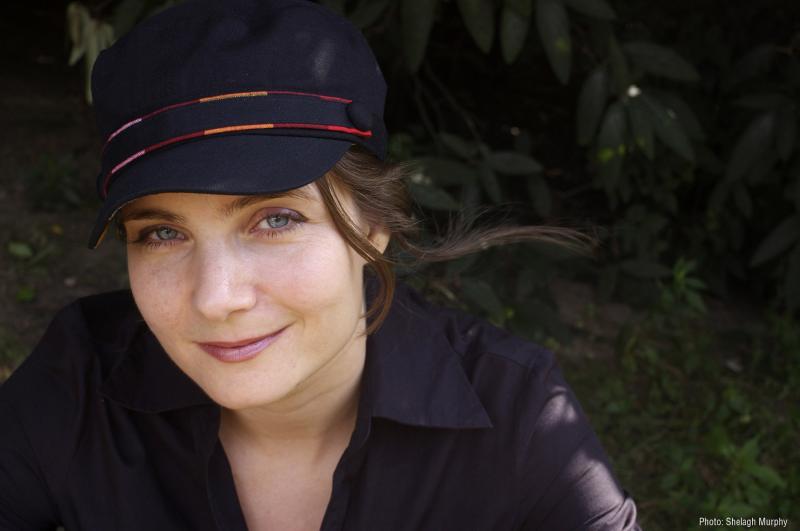 slideshow
Marta Topferova has never been easy to categorize--and that's just how she likes it. Born in the Czech Republic and now a longtime resident of New York, her music is rooted in the myriad sounds and styles of Latin America and the Caribbean. An unusual path, perhaps, but one that she's come by honestly and with great affection and devotion. Now Trova, Topferova's new release on World Village (available Tuesday, December 8, 2009), marks yet another evolution for this vocalist who, as The New York Times noted, “sings with an elegant longing in her voice."

Recorded in the Czech Republic in the spring of 2009, and self-produced by Topferova, Trova--the root of the Spanish word for troubadour as well as a traditional Cuban music movement--is this multi-cultural diva's purest, most personal artistic statement to date. Brimming with the fire and passion so endemic to Latin music, Trova picks up where Topferova's previous album, 2006's Flor Nocturna, left off. That collection further established the singer--who also plays guitar and the cuatro, a guitar-like instrument popular in Latin-American music--as “a leading light of the nueva cancion movement of today," as the BBC put it.

For Trova, her fifth album, Topferova chose to explore new but related sounds and moods. “I wanted to go for a contrast and make Trova a more upbeat record," she says, “highlighting more Caribbean influences such as the Cuban son, bolero, Puerto Rican bomba, etc. I was always fond of the Cuban tres (a steel-string guitar with three sets of double strings) and I was lucky to find a tres player (Aaron Halva) who knows the Trova tradition very well, but is also a very versatile musician who can play many other rhythms and styles on the tres." In addition to Topferova and Halva (who also plays accordion and sings background), the core band on Trova includes Roland Satterwhite (violin, background vocals), Pedro Giraudo (acoustic bass, background vocals) and Neil Ochoa (congas, bombo, cajon, pandeiro, bell and cymbal).

From the opening track, “Julign" (Hooligan), Topferova captivates with her emotional yet playful delivery and seductive command. The song, one of several she wrote or co-wrote, confronts the tragedy of homelessness with a narrative depicting the plight of an educated man who's fallen on hard times. Other original pieces, among them the dreamy ballads “Madrugada" (Dawn) and “La Pradera (The Meadow), survey other moods entirely, building upon Topferova's penchant for the poetic. Begins the latter: “A voice calls me from the mysterious sky, from its deep blue, like velvet, and it's your voice, my love, of your divine soul."

Says Topferova about the range of songcraft featured on Trova, “I like to write about many themes. 'La Pradera' is an older song of mine that I re-arranged for Trova, inspired by missing someone very close to me. Another song I'm fond of is 'La Amapola,' which was inspired by poppy flowers common in the Czech countryside. 'Camina y Ven Pa La Loma' is an old Cuban favorite of mine, 'Entre a Mi Pago Sin Golpear' is an Argentinean chacarera with a chord progression that has a great twist, and 'Mar y Cielo' is an old bolero with a groovy mambo feel on the bridge. The interesting thing about 'Mar y Cielo' is that it's usually sung by men. I thought a woman's voice would offer a different take on it."

For the recording, Topferova chose to keep things low-key, in order to capture the immediacy of the musicians' live sound. Cutting the songs in a studio near Prague after a European tour allowed her to take more time to hone the performances than the group would have had in their everyday big-city environment. “I wanted to do a band record this time around," says Topferova. “In the past, producing an album in New York, it was easy to get carried away with special guests on different instruments and end up with an album with distinct colors and sounds for each song. That has certainly been a fun and creative way to work. But one must have the time and budget to do that. With Trova, I needed to keep things simpler. I really wanted to capture just how we play live with my Latin American group. The studio, Sono, and engineer Michal Vani turned out to be fabulous. We recorded the whole thing live in the main hall, which had amazing acoustics. This was the first time I didn't need to wear headphones to record."

The 11 tracks on Trova reflect that casual, unfettered approach, yet there is a palpable intensity embedded within the calmness and closeness. Topferova's overflowing enthusiasm for the songs and the sound she and her crew are creating is at times barely contained. “Sono Studio is a big old farmhouse with a hotel and restaurant attached, so we stayed and ate there during the sessions," she explains. “This created such a relaxed atmosphere for the making of the album. We just played and sang naturally; I think you can tell that the album was done that way," she says. “It has a warm and organic sound, like older recordings. It's worth having a few imperfections here and there, in order to capture the spirit of a group playing together," she concludes. “We had a great time making this album; it was a highly memorable moment!"

Fortunately, those memorable moments are now ours to savor.