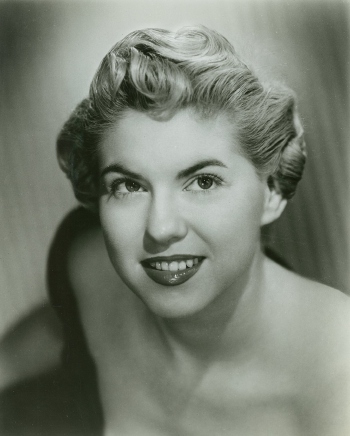 slideshow
She was known for 'All About Ronnie,' which she did as part of the Stan Kenton Orchestra. She became a soloist in the 1950s and had hits with 'Trust in Me' and 'About the Blues.'

After recording hits with the Stan Kenton Orchestra, Chris Connor became a soloist who often worked with small groups. Some of her best-known songs include “Trust in Me" and “About the Blues."

Chris Connor, a smoky-voiced jazz vocalist who gained renown for her recording of “All About Ronnie" and other singles with the Stan Kenton Orchestra before going solo in 1953 and having success with songs such as “Trust in Me" and “About the Blues," has died. She was 81.

In a more than 50-year singing career that began in the late 1940s with the Claude Thornhill Orchestra, Connor recorded with bandleader Herbie Fields and sang with Jerry Wald's big band before joining Kenton in early 1953.

Known for what has been described as her “warm, cello-like tones" and using little or no vibrato, she achieved her greatest acclaim beginning in the mid-1950s singing with small groups made up of established jazz musicians.

“She, along with Carmen McRae, really pioneered jazz trio singing where they'd stand in front of a mike and, supported by piano, bass and drums, created enormous intimacy," said jazz historian and journalist Marc Myers.

The interesting thing about Connor, said jazz critic Don Heckman, was that “she came along at a time when there was a concept of coolness coming into jazz -- the Miles Davis 'Birth of the Cool' recordings and the general sense of coolness that was associated with West Coast jazz, which was becoming very popular.

“The clear sound of her vibrato-less vocals and her cool onstage manner always reminded me of the detachment of the [Alfred] Hitchcock heroines of the time."