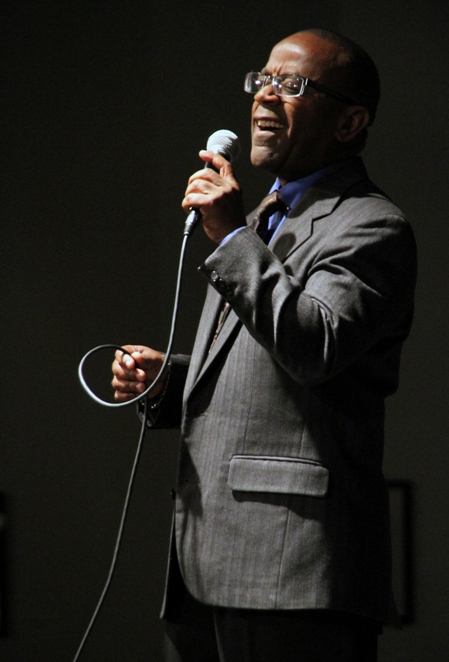 slideshow
Jazz singer Kenny Washington has it all, musically. The diminutive vocalist, based for more than two decades in Oakland, California, has range, fluidity and a natural sense of swing. He grew up singing gospel music as a child in New Orleans- and that music's passion fuels his soulful artistry.

His creativity- singing, scatting and even whistling- was on full display on Saturday, January 27 when he was the featured guest with the Dan Miller-Lew DelGatto quintet at the Sidney and Berne Davis Art Center in downtown Fort Myers.The band includes Miller on trumpet, Del Gatto on tenor sax, Joe Delaney on piano, Don Mopsick on bass and Tony Vigilante on drums.

The Fort Myers evening ranged from Great American Songbook and jazz standards to bebop, the blues and a touch of Brazil. Antonio Carlos Jobim's “Dindi" showcased Washington with noteworthy support from Del Gatto on flute rather than his usual tenor sax, and Delaney on piano.

The band roared through Bobby Timmons' “Moanin'" (a Jazz Messengers classic), “Everyday I Have the Blues" and Thelonious Monk's “Rhythm-a-Ning." Washington displayed his balladic side in segments with just the rhythm section on “All the Way," Jule Styne's “Time After Time" and “Stars Fell on Alabama."

The evening's tour de force was Washington's version of soul singer Otis Redding's 1967 posthumous hit “(Sittin' On) The Dock of the Bay." Bluesman Sam Taylor added the brief, distinctive whistling interlude on the original recording before its release. Washington expanded those few bars into something all his own. His extended, improvised whistling, stretching nearly two minutes, included a call-and-response segment in which he shifted tones back and forth to create a conversation- with himself.

While he stands at about 5'3"- or perhaps a tad less- Kenny Washington's his stature as an artist and respect from other musicians is immense. Major American record labels haven't been paying attention.That's a shame.

It may be hard to find, but Denmark's Storyville jazz label did release a Washington CD, Moanin', which he recorded live in October 2015 in Copenhagen's Montmarte jazz club with a local trio.

Washington's U.S. recordings have been as a co-leader on small labels, or in the case of the stunning most recent example, as a guest singer. He's one of 10 vocalists on pianist David K. Mathew's The Fantasy Vocal Sessions Vol. 1, Standards (Effendi Records), which is being released on February 2. Kenny's reinterpretation of “Lush Life" is stunning.