Maximize your visibility at All About Jazz by upgrading your musician page from standard to premium. With it, you'll receive All About Jazz home page exposure, a highly stylized / ad-free musician page with bonus features and benefits, an ad, plus you control where you sell your music and so much more.
Learn More
190

Caetano Veloso in Boston on April 12 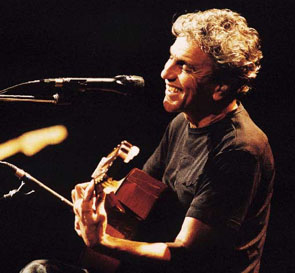 Monday, April 12 at The Orpheum Theatre

“The Brazilian master remains in a league of his own. Forty years after injecting a rock beat into Brazilian pop (and earning the disapproval of the country's military rulers in the process), Veloso has returned to similar territory . . . fans won't be disappointed." --Times (UK)

Brazilian legend Caetano Veloso's 41st album, zii e zie, released last year in South America and Europe, has already earned him a Latin Grammy for 2009 Best Singer- Songwriter album; Nonesuch releases the record in the United States on March 30, 2010. The samba-inspired album's title is an Italian phrase for “uncles and aunts" that the singer/songwriter liked for the way it looks and sounds, and selected “because of the freedom of the mysterious choice." Veloso returns to the United States in April for six performances, including dates in Boston, New York City, San Francisco, Miami and Los Angeles.

On zii e zie, which was produced by Pedro Sa and Caetano's son Moreno Veloso, the singer is joined by the same youthful trio he employed on 2007's C, an album of rock- oriented tracks. “We are people of different generations sharing similar musical and human interests," Veloso says. David Byrne said of C in Artforum, “Veloso has found a sparse, post-rock beauty in which strange yet simple rock instrumentation is juxtaposed with softly seething vocals."

For zii e zie, Veloso reverses the equation. Here, samba is the foundation, filtered through a rock sensibility. Veloso calls this approach “transamba" -- “as if it were samba transcending itself," he said in an interview. His subject matter, as always, can be intensely personal, but he also takes a broader view of the world at large. As Veloso says of the lyrics, “Mostly they focus on Rio. But even there, they go from the favelas to Leblon, from Lapa to the beach, from Chico Alves to Los Hermanos, from its typical anonymous characters to its atypical celebrities. But they look further still: to Guantnamo, to the caverns in Afghanistan, to Washington, D.C."

Says London's Guardian, “The songs are intimate and surprising, with sudden bursts of electric guitar transforming the easy-going 'Falso Leblon,' and handclaps and funk guitar lines matched against the laid-back vocals on 'A Cor Amarela.' Best of all, there's the half-spoken 'A Base de Guantnamo,' which sounds like a classic and angry protest song even if you can't speak Portuguese."

CAETANO VELOSO is among the most influential and beloved artists to emerge from Brazil. Known there since the 1960's, Veloso has made more than thirty recordings to date and has developed a strong international following.

Born in Santo Amaro, Bahia, in 1942, Caetano Veloso began his professional musical career in 1965 in Sao Paulo. In his first compositions he drew on the bossa novas of Joao Gilberto, but rapidly began to develop his own distinctive style. Absorbing musical and aesthetic ideas from sources as diverse as The Beatles, concrete poetry, the French Dadaists and the Brazilian modernist poets of the 1920s, Caetano, together with Gilberto Gil, Gal Costa, his sister Maria Bethania, and a number of other poets and intellectuals, founded a movement called Tropicalismo. By experimenting with new sounds and words, adding electric guitars to their bands and utilizing the imagery of modern poetry, Caetano became a musical revolutionary.

This short-lived movement, founded in 1968, ended abruptly when Caetano and Gil were sent into exile and lived in London. Now universally credited with redefining what is known as Brazilian music, it laid the groundwork for a renaissance of Brazilian popular music both at home and abroad. Caetano and Gil returned to Brazil in 1972 and found that Tropicalismo had remained intact and their audience had continued to grow.

Although Tropicalismo set the tone for Caetano's career, his music has evolved greatly over the years. Incorporating elements of rock, reggae, fado, tango, samba canao, baiao and rap-- with lyrics containing some of the best poetry in a musical tradition rich in verse-- Caetano's music is sometimes traditional, sometimes contemporary, often hybrid. At once an astute social commentator and balladeer of highly emotive love songs, Caetano is one of the most respected poets in the Portuguese language. Indeed he is one of only a handful of artists who has resolved how to be musically modern and still undeniably Brazilian.

Veloso followed his 1999 Grammy Award-Winning Nonesuch release Livro, an album which garnered widespread critical acclaim in the US and brought with it his first-ever US tour, followed by a soundtrack for the Carlos Diegues film Orfeu.

In spring 2001 Nonesuch released Noites do Norte (Nights of the North), a meditation on themes of race, slavery and Brazil's quest for a national identity. Caetano recently completed a book on Brazilian music and culture, to be published in the US on Knopf later this year. Caetano's current release is Omaggio a Federico e Giulietta, a live recording made in 1997 in Rimini in honor of two masters of Italian cinema, Federico Fellini and Giulietta Masina.

Caetano's long-awaited memoir, Tropical Truth: A Story of Music and Revolution in Brazil,was published by Knopf in Fall 2002, alongside the release of a 2-CD set, Live in Bahia, signaling a period of unprecedented activity in the U.S.

His first album sung entirely in English, A Foreign Sound (released in 2004)was a culmination of Veloso's longstanding and multifarious exploration of American music. Surprising and imaginative interpretations of American songs have been a staple of his recent live shows, and they have made occasional appearances on his studio albums over the years. As he explains in his acclaimed memoir, Tropical Truth: A Story of Music & Revolution in Brazil, he came to some of his favorite American singers and musicians-- including Billie Holiday, Ella Fitzgerald, Chet Baker, Miles Davis, and the Modern Jazz Quartet--by tracing the steps of his foremost musical hero, Joao Gilberto. On A Foreign Sound, Veloso interpreted several songs he first learned listening to these artists in the early 1960s, including “So In Love," “Love for Sale," “Manhattan," and “Body and Soul." Other songs have particular significance in the context of Brazilian culture.

Caetano Veloso's cwas released by Nonesuch Records on January 23, 2007. The record includes twelve original songs by Veloso (vocals, nylon and steel guitars), who recorded them in the spring/summer of 2006 with a rock band of younger musicians: Pedro S (electric guitar), Ricardo Dias Gomes (bass, Rhodes piano), and Marcelo Callado (drums); it was produced by S and Moreno Veloso. Additionally, Pedro's brother, Jonas S, sings guest vocals on one track. (c was released in Brazil in the fall of 2006.)