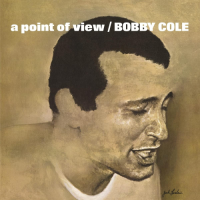 Like Bobby Troup and Bobby Scott, Bobby Cole was a songwriter, arranger and lounge pianist-singer. But unlike the other two Bobbys, Bobby Cole is virtually unknown today. That's largely due to the year Cole came up, in 1960, and his decision to pass on recording opportunities with major labels because of the junk they wanted him to sing and their refusal to let him record songs he wrote. In retrospect, Cole was right. [Photo above of Bobby Cole]

Want proof? Cheryl Pawelski at Omnivore Recordings recently released Bobby Cole: A Point of View, recorded in 1967 and issued on the Concentric label. Listening to the album, I'm rather astonished that such a hip talent wasn't able to see his vision through, even in the pop-rock and pop-soul era. He had everything going for him, including extraordinary talent.

But let's start at the beginning. Cole was born in 1932 in New York and grew up in Astoria, Queens. In the 1950s, after a stint in the Army, he put together a local band but soon shifted to a trio, playing piano and singing. The group premiered at the Living Room in Manhattan in 1960, which soon led to becoming the house pianist at Jilly's, the Manhattan watering hole co-owned by Frank Sinatra. Cole was offered a record by Capitol, but he turned it down. Capitol wanted him to record commercial songs of the day.

In 1961, Cole had a change of heart and recorded for Columbia. But whatever he was promised in terms of his recording a few of his songs evaporated, and the album of lightweight standards, New, New New, is largely a bore. In 1964, Cole was introduced to Judy Garland at Jilly's. They hit it off, and weeks later Cole was hired by the Judy Garland Show as musical arranger after Mel Torme left. But later that year, the show was cancelled and Cole was back to playing with his trio.

In 1967, Garland hired him to conduct the orchestra for her concerts at the Palace Theatre on Broadway in Times Square. Cole came to the attention of Jack Lonshein who was working for Mainstream Records as the label's album cover artist. Lonshein tried to persuade Bob Shad, Mainstream's founder, to record an album of Cole playing and singing his originals. But Shad passed. [Photo above of Judy Garland and Bobby Cole at an ASCAP event in 1967]

Lonshein promptly quit and, in 1966, started his own label—Concentric Records—and recorded Cole and his originals. The album, A Point of View, was released in 1967 and did well in New York. But as funds raced out of jazz labels to rock ventures, Cole never again gained the momentum needed to become a household-name recording artist. He died on his way to his regular gig at Campagnola, a trattoria on Manhattan's Upper East Side in 1996.

Hugs to Cheryl for re-issuing this beauty with all of the previously unreleased material.

JazzWax clips: Here's Bobby Cole in 1964 on the Judy Garland Show. Move the space bar to 1:39. As you watch the first two numbers, try to remember that Cole, the singer, is also playing piano. Then watch as perhaps the finest Garland small-group recording on tape and the strongest chemistry between Garland and a musician unfolds on Poor Butterfly. Absolutely amazing. Why these two didn't go straight into a New York studio to record an duet album is beyond me. A missed opportunity...

Here's Cole singing and playing his song, But It's Spring...

And here's The Name of the Game Is Trouble...

And here's Cole in 1975 in Atlantic City singing and playing The End of a Love Affair...