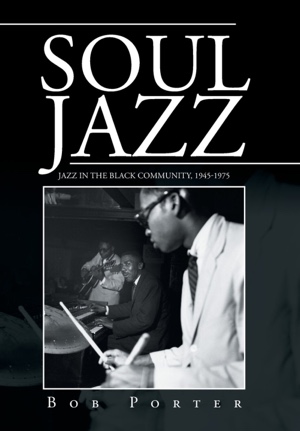 Back in the late 1960s and early 1970s, when I was in my early teens and just starting to listen to jazz, the soul-jazz albums I dug most were on Prestige and produced by Bob Porter (above). These included Leon Spencer Jr.'s Louisiana Slim, Sonny Stitt and Gene Ammons' You Talk That Talk and Sonny Stitt and Don Patterson's Tune Up! Over the years, Bob produced nearly 200 albums in all, including reissue sets for Savoy and Atlantic. He also has spent more than 30 years on WBGO-FM in Newark, N.J., hosting Portraits in Blue.

Now Bob has a new book out—Soul Jazz: Jazz in the Black Community, 1945-1975 (Xlibris) (go here). I recently asked Bob to talk about his five favorite albums he produced that have great stories attached, including his very first record for Prestige:

Charles Kynard—Professor Soul (Prestige, 1968). “This was the first session I produced for Prestige. It was recorded in Los Angeles, before I moved East. I signed organist Charles Kynard, the nephew of Ben Kynard—the composer of Red Top—and did four albums with him. Professor Soul was recorded with his working trio: Cal Green on guitar and Johnny Kirkwood on drums. Charles was an Oscar Peterson-influenced organist I had known since record-company owner/producer Dick Bock brought him to L.A. from Kansas City. On Professor Soul, we recorded a very churchy version of Cristo Redentor—before all the organists began playing the tune. In retrospect, Charles was too good for his time. The organ sound that sold well then was the Jimmy Smith style, and Kynard's was quite different. He used the bass pedals and both hands. Kynard died at age 46 while on a gig playing for Jon Hendricks’ Evolution of the Blues Song." Here's Song of Delilah...

Harold Mabern—Rakin' and Scrapin' (Prestige, 1968). “This album was recorded just before Christmas in 1968. I thought for sure it would be a hit—we had a terrific tune in the title track that had a great groove. Trumpeter Blue Mitchell and tenor saxophonist George Coleman played solid solos. I remember that pianist Mabern wanted another tenor part added, so we overdubbed one. Then we didn’t use it. We put out a single on Rakin’ and Scrapin’ and promoted it hard to radio stations. The single was played, but it didn’t sell. It probably didn’t help that Mabern was without a working band, so touring was out. Mabern was a family guy who didn't like to travel. He preferred staying in New York. In many respects, the album was more a Blue Note-kind of record. But if it had come out five years earlier, I think it would have found an audience. In 1968, most record companies stopped making mono albums, switching to the pricier stereo. By this time, most of Prestige's albums were marketed to African-American audiences, which favored the less-expensive mono releases. Straight-ahead jazz sales really plummeted about this time." Here's Rakin' and Scrapin'...

Houston Person—Goodness! (Prestige, 1969). “Prestige owner Bob Weinstock stayed with Houston Person for six albums before he had a hit with Goodness! Houston was signed by Cal Lampley, and Don Schlitten had produced his first three LPs. I was on my second with Houston when Goodness! was made. The band we assembled was an interesting mix of players: guitarist Billy Butler and bassist Bob Bushnell were studio pros who had worked together many times while organist Sonny Phillips, drummer Frankie Jones and Buddy Caldwell on congas were Houston’s guys. Sonny brought in a tune entitled Jamilah, which got all the airplay, and the album broke out in Detroit and Philadelphia. Those two markets sold enough to turn the album into a hit LP in 1969. My contribution to Jamilah was to have Caldwell lay out, which turned out to be a good move. Bob Bushnell was a real hero here. Because there was no conga, you get the full impact of his bass line. The album really launched Houston's career. Solly Hartstein, who ran Detroit's Baker’s Keyboard Lounge, flew in to meet Houston on one of my sessions. Soon Houston was a regular in Detroit, Chicago and all the key stops on the jazz trail. This was just before he joined forces with Etta Jones." Here's Jamilah...

Gene Ammons—Brother Jug (Prestige, 1970). “One day in late 1969, Dan Morgenstern, then editor of Down Beat in Chicago, called Prestige to tell us that Gene Ammons had been released from prison. I had written to Gene while he was away serving out a narcotics charge to keep him up to speed on what Prestige was doing with his album catalog. After Dan called, I flew to Chicago and signed Gene to a new deal and made plans to cut two albums with him. The first album [The Boss Is Back!] would be with old friends, including pianist Junior Mance, bassist Buster Williams and Candido Camero on congas. The second [Brother Jug] would be with my guys—Sonny Phillips, Bob Bushnell and drummer Bernard Purdie. Weinstock wanted a spare rhythm section sound on the second date, so initially there was no guitar. We overdubbed Billy Butler playing some rhythm parts on a couple of tunes, and Gene really dug it. The album had two singles: one was Jungle Strut, where Bushnell stands out, and the second was a great ballad, Didn’t We. At the end of the Didn’t We take, Purdie was so elated that he jumped off his drums and ran across the floor and lifted Gene right off the ground." Here's Jungle Strut...

Hank Crawford/Jimmy McGriff—Steppin' Up (Milestone, 1987). “The Crawford-McGriff band was put together at a lunch in 1985 with Jimmy’s manager, Maxine Harvard, Fantasy Records president Ralph Kaffel and Hank, Jimmy and me. The concept was always small group, with alto saxophonist Hank Crawford the only horn. Hank’s leadership albums tended to feature his arrangements as well as his playing while organist Jimmy McGriff’s albums were looser, more of a blowing session. The small group allowed for special guests. Guitarist George Benson played on two tracks on the first album, Soul Survivors. For the second album, Steppin’ Up, I wanted keyboardist Billy Preston. Almost everyone thought I was nuts. I first had heard Preston when he was a teenage pianist behind blues singer Jimmy Witherspoon and I had known about his gospel playing for many years. Hank and I had talked about doing River’s Invitation. Hank was tight with blues singer Percy Mayfield, the song's composer, and knew exactly the tempo he wanted on the tune. Oddly, on the finished take, we didn’t get the tempo we had talked about but Billy added just the right touch and McGriff has a great solo. It’s my favorite performance of all the ones I did with those guys." Here's River's Invitation...