Blue Note At Sea '18 Special Double Offer: Two Can Sail For The Price Of One On Veranda Staterooms And Inside Staterooms Are Now Only $700 Per Person

With double the number of performances and activities as were featured on the 2017 inaugural cruise, Blue Note at Sea has just announced a special “double offer.” With every booking of a Veranda Stateroom, two guests can sail for the price of one. Or you can book an Inside Stateroom at $700 per person. But don’t wait long, cabins are booking fast! 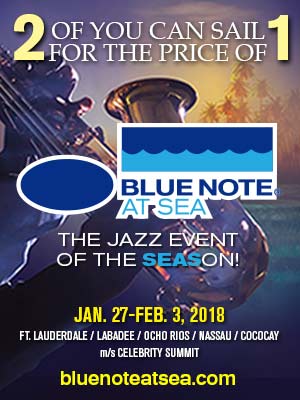 Blue Note at Sea '18, which will sail from January 27 to February 3, 2018, continues to add to its initial slate of artists and activities to create a truly one of a kind experience for its guests, unlike anything that might be experienced at a single land- locked concert or festival. The second-year sailing of the cruise now will offer over 100 of hours of live music by over 75 musicians, including two Tony Award winners, the recipients of more than 50 Grammy winners, and four NEA Jazz Masters. The NEA Jazz Masters, all of whom are sailing on Blue Note at Sea for the first time, are among the most celebrated jazz artists of our time: 22-time Grammy winner and NEA Jazz Master Chick Corea, NEA Jazz Master Charles Lloyd, triple Grammy- winner and Dee Dee Bridgewater, and Dr. Lonnie Smith.

In addition to these and the other acclaimed artists who signed on earlier this year to perform, eight additional artists have been added to the roster including Kendrick Scott, Eric Marienthal, Jose James, Aaron Parks, Tom Kennedy, Harold Lopez-Nussa and Damion Reid.

“The lineup for Blue Note at Sea is extraordinary,” says Entertainment Cruise Productions President Michael Lazaroff. “It is truly a ship of headliners.” Although the chance to see as many remarkable artists in as many musical configurations is certainly unparalleled, Blue Note at Sea is also offering an expanded array of activities throughout the seven-day cruise. Blue Note at Sea '18 will again be hosted by multi-Grammy winning bassist Marcus Miller. Other returning Grammy-winning artists are Robert Glasper, Lalah Hathaway and David Sanborn. While Glasper and Sanborn will perform in the same configurations as they did on Blue Note at Sea's inaugural sailing, five-time Grammy winner Hathaway will bring her own band on board this time out. The three bands together feature 11 top jazz musicians, all of whom will be performing in other configurations and groups during the cruise.

Multi-Grammy winning pianist Robert Glasper will also be appearing with the incredible sextet of young visionary musicians, The Blue Note All Stars.

As well as performing, Lalah Hathaway will serve as late night DJ, spinning tunes in the Blue Note Records Upbeat Lounge. Guests will also be able to experience a rare sit-down between Blue Note Records President Don Was and Chick Corea, attend an up-close conversation with Robert Glasper, attend four amazing late-night shows hosted by David Sanborn, catch an exceptional live set from the Blue Note All Stars—whose recently released debut album, Our Point of View, was cited by NPR as “a collective manifesto and a portrait of contemporary jazz—and spend a full evening with Charles Lloyd and the Marvels. With double the number of performances and activities as were featured on the 2017 inaugural cruise, Blue Note at Sea has just announced a special “double offer.” With every booking of a Veranda Stateroom, two guests can sail for the price of one. Or you can book an Inside Stateroom at $700 per person. But don’t wait long, cabins are booking fast!

Featuring the most highly respected and renowned contemporary jazz performers in the world, Blue Note at Sea is a collaboration among Blue Note Jazz Clubs, Blue Note Records, and Entertainment Cruise Productions. From stunning main shows to their signature Night Music events to Late, Late Night shows and jam sessions, Blue Note at Sea defines what is new and hip in the world of jazz while also retaining and respecting those aspects of the genre that have made jazz one of the true enduring musical styles around the world.

Blue Note at Sea will sail on Celebrity Summit from January 27-February 3, 2018, departing from Ft. Lauderdale, with ports of call in Labadee (Haiti), Ocho Rios, Nassau and Coco Cay (Bahamas). For more information about the cruise program and the specials being offered, go to bluenoteatsea.com.