All of my music is improvisational... a conversation between musicians and musical instruments. A joint emotional expression inspired by a certain common feeling, thought or perspective in an instinctual, unpredictable, freely expressed improvisation exploring authentic feelings and inspirations that is being communicated to an audience, a listener, a community. —Billie Davies 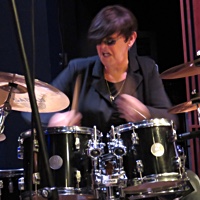 Billie Davies announces her Perspectives project finale performance, “Perspectives II”. The performance will be recorded live for sound by Mike Davies and video filmed by Marion Hill and her team and will be produced as a digital only release (music) and Digital Streaming Video/DVD (music/video) and is slated to be released in the fall of 2018.

Following the improvisational exploration of “Perspectives I”, performed at the New Orleans Jazz Museum, Music At The Mint, on January 31 2018, the project finale, “Perspectives II”, continues an all spontaneous, instinctive, intuitive improvisation inspired by 7 Perspectives, words and 7 chakra musical keys, expressed by a quartet of piano / keys, baritone saxophone / flute, bass and drums, vocals / spoken word by 2 female vocalists and 2 female dancers.

Abstract Expressionist Improvisations Neither confused by the light Nor blinded by dogma, color or political correctness.

An ever evolving improvisation, a message to raise the awareness of life and living, love and loving from a deeply natural, instinctive perspective, so people start to listen to their heart, to feel their soul, without fear, wholly responsible for every action taken, and in doing so feel truly happy and fulfilled in harmony with mother nature.

Musicians expressing through sound, vocalists through words and dancers through movement, all expressing Perspectives of Nature, Life, Happiness, Love, Freedom, Art and Rhythm. 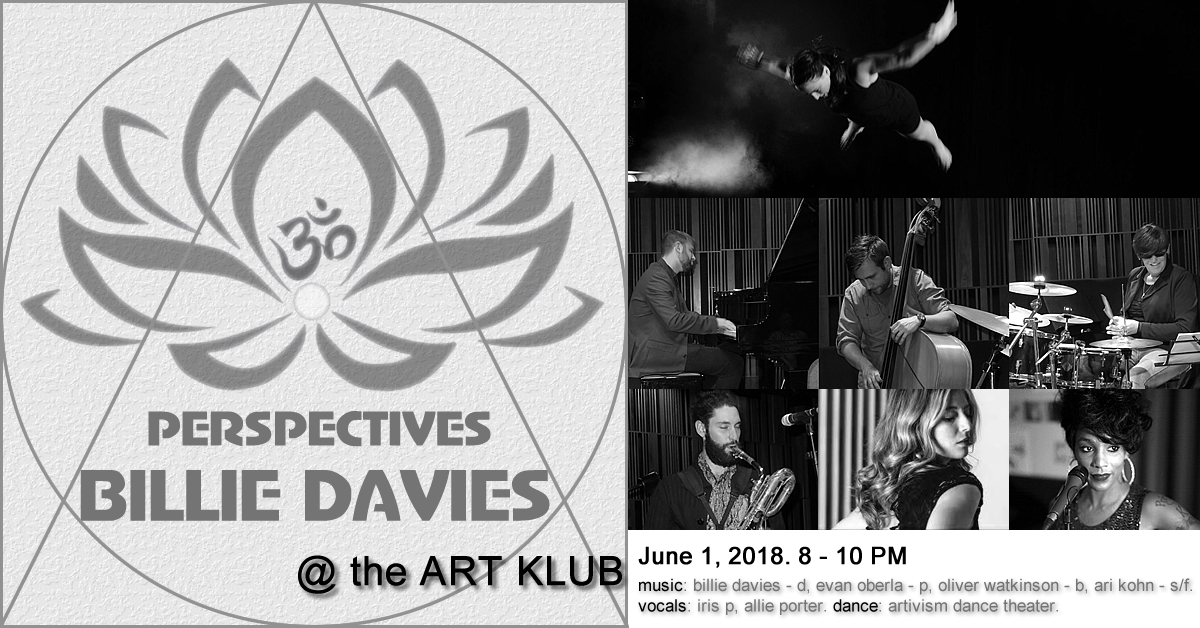 Billie is an American female drummer and composer best known for her avant-garde and avant-garde jazz compositions since the mid-1990s, and her improvisational drumming techniques.

“Billie Davies is a very accomplished free-jazz drummer. Born in Belgium, she now lives in New Orleans, having spent much of her life living peripatetically. Previous reviewers have made much of the self-taught nature of her drumming. I defy any listener to distinguish her playing from someone ‘schooled’ in jazz drumming. There is a vitality and fluidity in the way that she plays the drum kit... her stories explain her drumming...”—Chris Baber, Jazz Views (June 30, 2016)

Her 2012 release of “all about Love” solidified her position as a professional jazz musician. This recording of standards and original music, charted #1 in CMJ Jazz College Radio Charts for ‘top jazz add’ in new albums and went on to stay in the top 20 for 4 weeks. Also well received in Canada, the album ended up in the Top 10 on three different !Earshot Jazz charts.

In 2013 Billie Davies received the “Jazz Artist of the Year" Award by the 23rd Annual Los Angeles Music Awards.

She received more national and international attention due to a player feature in Downbeat Magazine May 2016 edition, “Billie Davies '20 Years Stronger'".

On Hollywood Boulevard, released in December 2016 became a January 2017 Editor's Pick on DownBeat.com.

“Music never stops, it only begins. All the music that ever was exists now. It is the musician's job to tune into the universe and become a vessel for the music of the moment." Evan Oberla Evan was born and raised in Columbus, Ohio, playing piano and guitar at an early age. In 5th grade he picked up the trombone for the school band. In high school his musicality led him to participate in multiple jazz ensembles, including the acclaimed Columbus Youth Jazz Orchestra. Evan graduated in June 2009 from Ohio State University with a degree in Jazz Studies performance. A diverse and active musician based out of New Orleans, LA, he can be found with acts such as EO & The Tasty Sapiens, Brass Lightning, Sexual Thunder, Allie Porter Band, Billie Davies, Miss Mojo, Mike Dillon & more. Evan has toured nationally with O.A.R., Allen Stone, and Elle King.

Born in Brunswick Maine, Oliver began studying music at the age of five. He attended college in Boston at the New England Conservatory, where he had the opportunity to study upright jazz bass and perform with greats such as Lee Konitz, Dave Holland, Jason Moran, Cecil McBee, and many more. In 2014, Oliver moved to New Orleans and began performing with Billie Davies in 2015, Gandhi Castle, Laelume, and various street bands. He has taught and performed all over the United States, as well as Central America and Canada.

Born in Portland, OR he now lives in New Orleans and is a jazz studies graduate from Tulane University. Ari is fast becoming one of the important younger musicians in New Orleans. He is a very creative and dedicated reeds/woodwind player that can be found playing with Brass Lightning, Miss Mojo, Allen Stone, Elle King, Sexual Thunder!, Doombalaya, Noruz, and more. He is a BOOST Music Teacher at New Orleans College Prep Charter Schools.

He joined Billie Davies in January of 2018 for the “Perspectives I & II” project.

Born in 1985, in New Orleans, Catherine Poree' aka IRIS P, discovered her talent when she received her very first instrument, a violin, at the age of 6. From there she went on to perform in orchestra concerts and a host of plays, but most of all enjoyed singing with her mother, the late Marilyn J. Etienne, also known as LADY GOSPEL. In 2010 IRIS P started her mission to “save the world" by performing her original songs written from her extravagant poetry debuting a plethora of songs from her Underground EP “I Got Issues". IRIS P shows style like no-other with Jazz Melodies when she played “Billie Holiday" in “Dryades Street Divas Review" in the summer of 2014, held at Ashe's Cultural Center. She won “Nola’s Hottest Female Vocalist In October of 2014" at the Nola Hip Hop Awards, and headlined in the Foundation Room at the New Orleans House of Blues. She joined Billie Davies for the recording of “On Hollywood Boulevard” in 2016.

Hails from Crofton, MD and is a singer and songwriter now living in New Orleans with honest pipes and a heart of gold bringing you the music of your past, present and future. She has been influenced by Grace Slick, Joni Mitchell, Irma Thomas, Ella Fitzgerald, Billie Holiday, Beyonce and Janis Joplin.

She can be seen performing in New Orleans with The Allie Porter Band, The Holy Trinity Trio and more. She joined Billie Davies in January of 2018 for the “Perspectives I & II” project.

Artivism Dance Theatre is a collective dedicated to bringing awareness of social issues to a wide range of audiences through dance theatre. Artivism aims to generate discussion amongst its audiences and open a dialogue around these important issues. We prioritize communication of social message over esoteric performance, often using multimedia techniques in our work. We believe that art, and specifically movement, can communicate perspective and experience across gaps in culture, language, and tradition that might otherwise remain unbreachable.

Artistic Director and Founder Sophia Rabinovitz has been creating work since she could walk and directing since she could speak. She began formally training at the age of six and holds a BFA in Dance, a BA in Anthropology from Temple University and a MA in Dance Cultures from the University of Surrey. Her training in dance consists of a multitude of different forms and her choreography reflects this diversity. Sophia’s choreography is varied in its origin and innovative in its combination of movement styles, such as West African, Caribbean, Contemporary, Jazz, Hip-Hop, and Latin dance. She strongly believes in the power of movement to express ideas, educate, and to encourage discussion about major issues in our society. This belief has inspired Sophia to create Artivism Dance Theatre, producing work that reflects the world we live in and inspiring dialogue about important issues in our society.