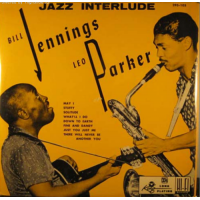 slideshow
In the early 1950s, before modern jazz giants emerged with the rise of the 12-inch LP and the prestigious signing of Miles Davis to Columbia Records, R&B was all the rage. Independent radio saw to that, since many small stations in African-American communities played R&B records. They attracted larger listening audiences than jazz singles.

Back then, R&B was largely for adults, since many of those singles were geared for jukeboxes in bars and clubs. African-American and white teens found the music by turning their radio dials at night. If you flip through Billboard and Down Beat during the dawn of the 1950s, you'll see ad after ad for R&B records and artists. Dance and party music held sway over bebop. Jazz's heyday would come in the second half of the decade.

During the early 1950s, many jazz musicians played in R&B bands and on R&B recordings to supplement their incomes. Two of those jazz-R&B musicians were guitarist Bill Jennings and baritone saxophonist Leo Parker. Jennings was from Indianapolis and distinguished himself by being able to play in virtually any style, from swing and bop to jump blues and pop. In those days, Indianapolis was a club hub for many musicians passing through town. Knowing every style of music meant greater work possibilities as a sideman.

Parker was a hardcore jazz player from Washington, D.C., who was appeared on one of the first bebop-flavored recording sessions led by Coleman Hawkins in February 1944—the Woody'n You date that included trumpeter Dizzy Gillespie, saxophonists Budd Johnson and Don Byas, pianist Clyde Hart, bassist Oscar Pettiford and drummer Max Roach. Parker also was the anchor of Billy Eckstine's orchestra in the mid-1940s, sitting shoulder to shoulder in the reed section with Dexter Gordon, Sonny Stitt and Gene Ammons. In the years that followed, he recorded with Sarah Vaughn, Illinois Jacquet, Fats Navarro, Sir Charles Thompson, J.J. Johnson and others.

In July 1954, Parker recorded an album with Jennings called Jazz Interlude for the King label. The Cincinnati session featured Andrew Johnson (p,org), Joe Williams (b) and George DeHart (d). The 11 songs were a solid mix of jump blues, such as Get Hot, and jazz numbers such as May I?, Fine and Dandy and Solitude. The album has been long out of print and was all but lost until 2014.

Then, the material surfaced on Architect of Soul Jazz: Billy Jennings, the Complete Early Recordings 1951-1957. Once again, Jordi Pujol of Fresh Sound Records stepped in to save music that never would have seen the light of day otherwise.

As you listen to Jennings and Parker play together, there's a natural chemistry between them as they feed off each other's ideas. Parker rolled out a thick, deep baritone sound while Jennings thread his guitar notes in between Parker's husky tones. It's exciting music that fused R&B and jazz in the most exciting way. A shame they didn't record much more together.

JazzWax clips: Here's the entire King album. The sound on the Fresh Sound release is far superior and fully restored...