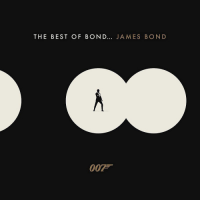 Between Acker Bilk's No. 1 Billboard pop-chart hit Stranger on the Shore in early 1962 and the Beatles arrival in America in February 1964, there was James Bond. The technicolor, sexualized action/spy film was a brand new genre, and Sean Connery's Bond was impossibly dashing and daring. Most of all, his British accent defined cool and primed the pump for the British Invasion to come. Bondmania was nearly on par with what would follow with the Fab Four. Double-oh-7 toys, games, trading cards and dozens of other products for kids rolled out. As for adults, many of whom were saddled with young kids, Bond made them feel young and sexy again.

As I've posted in the past, Thunderball was my first Bond film in the theater at age 10, courtesy of my father, who took me along since there was no place else to put me. When Domino (Claudine Auger) turned up on the beach in her black and white bikini, my dad dragged me out, not wanting to endure the wrath of my mother, I suppose.

I haven't yet seen No Time to Die, the 25th film in the official Bond series. But I was gratified to receive the newly updated Best of Bond...James Bond box. The set includes three new entries—No Time To Die by Billie Eilish from No Time To Die, Adele’s Skyfall from Skyfall, and Sam Smith’s Spectre theme from Writing’s on the Wall.

As a Bond devotee, I love listening to all the themes in order, starting with the James Bond Theme from Dr. No. Through this one box, you can hear through the music and vocals how the definition of masculinity and femininity has change over the decades, from the jazzy bombast of the 1960s to the softer power-ballad approach in the '70s and Brit-pop feel in the '80s and so on. Culturally, the Bond themes are like those long cylinders they sink into the Arctic to haul up ancient ice for signs of what happened on Earth over the centuries. The Bond themes tell us a great deal about what was going on and how we viewed ourselves. The main character remained the same, but how his prowess was celebrated through music shifted continuously based on the times.

The Bond franchise seems to be healthy based on box office receipts from the new film, despite the fact that the focus of evil has evolved over time. We're coming perilously close now to Bond rescuing the Western world from itself.

JazzWax clip: Here's the opening credits to Dr. No...

Here's the opening to Thunderball...

And here's the opening to Goldfinger...